Eoghan Dalton Reports
Waterford company Clem Jacob Hire has been recognised with a prestigious award in Britain for the high calibre service it provides across all aspects of its business.
The plant and event hire store walked away with the top prize in the Outstanding Single Depot Hire Company category at the 2018 Executive Hire Show Passionate Hirer Awards. The company beat out competition from another 708 outlets throughout the UK and Ireland. 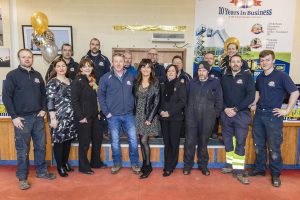 “This is a pretty big award, it’s mainly English. But it’s a colossal pool, the awards take in England, Scotland, Wales and Ireland,” Clem told The Munster Express. The awards ceremony were held in the Ricoh Arena in Coventry, with Clem getting put up in the Hilton Hotel for the duration if the trip.
Due to the unusual system the Executive Hire Show operates by, Clem and his staff didn’t realise they were nominated until after a series of tests had been carried out on the store by the judges. They came over posing as mystery shoppers, as well as putting in phone calls to gauge the helpfulness of staff.

“I was nominated by an English supplier. When all the serious stuff was done there were a number of different processes to get down to the 12 nominees, like a series of phone calls looking for prices, details, and then two guys were over for a visit. And then the head of the judging panel came over and went through a lot of details about the store,” said Clem. Among those details were presentation, staff, efficiency in handling orders from customers as well as the quality of its products and comfort with innovation. It was also noticed by judges that the store has a role in its community, frequently sponsoring sports clubs and lending equipment to worthy causes.

“The tests that we didn’t know about would have been about 15 to 20 minutes. But the head guy from the panel was here from early morning until maybe 3 or 4 o’clock that afternoon. It was fairly intense. He looked at everything – health and safety, besides the cleanliness of the shop and the staff. Transport and how we keep records of it, different contracts. He spoke to accounts and even credit checks were done on us. It was serious detail,” said Clem. His wife, Gillian, is immensely proud of what he has achieved. “Clem has worked exceptionally hard to get where he is today. It didn’t happen by accident. I mean, we’ve had things cancelled that we were going to because of work for years and years. It’s wonderful that it’s paid off, for everybody. Clem is the frontman but behind it all everybody else makes it work so well,” she said. 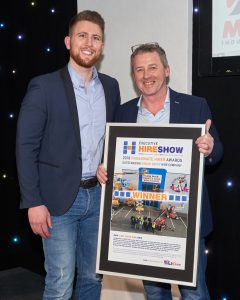 Manager Ray O’Sullivan isn’t surprised the shop received praise for its high quality equipment. “A lot of our business in Waterford is pharmaceutical. Everything has to be immaculate, up to date, fast to the site – that’s what we specialise in. We’d serve the likes of Teva, Sanofi and West. Clem is literally renewing the fleet constantly, or you won’t get work up there. Simple as. And sure it’s easier for us to work with if the gear is new, it’s just easier to maintain,” he said.
The judging panel also singled out the enthusiasm the staff bring to their work, which Clem puts down to the store still having much the same core team as did when they opened in 2006.

“It took a lot of time to get the staff, they’ve been more or less hand picked since 2006. Everybody’s really very committed, there’s quite a relaxed atmosphere and everybody gets their work done while getting on well. It makes a big difference,” he said.
Ray O’Sullivan feels similarly. “I knew Clem in school and I came back from Dublin in 2003 and I worked for him in another place for nearly 16 years, so when he was going out on his own I was always going to go with him. We’re here nearly 11 years now. It’s a long time and we haven’t killed each other yet. But we’ve loads of time. Though his angle, I’m well into it. The staff we have, they all know their stuff.”

Clem’s sister Carmel has also been in the store since 2006. She now looks after the training aspect of the business, providing courses to staff in factories on everything from manual handling to abrasive wheel training.
“All Clem’s hard work has really paid off, and all the sacrifices he’s made and all the sacrifices Gillian has made.
“In 2006, the phones rang, rang, rang. It was bedlam. So in 2008 when it all slumped it was kind of a frightening time too, but like our gear is really good because it’s always getting updated. We were able for it,” she said. Clem himself enjoys how much calmer it is now compared to years gone by. “It’s steadied up. It has. Since 2008 and 09, it has steadied immensely. Anything would be better than what we went through there. Once it stays at this level I’d be happy, as long as it doesn’t go mad again like it did in 2006. In 2006 it was crazy, just so busy, there was no sense or meaning to what was going on. Having it nice and steady now is good.”