Home » Business » Confidence is returning to the city, says Broker

Confidence is returning to the city, says Broker 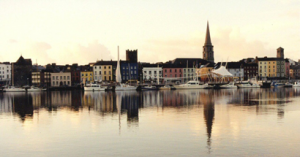 One of Waterford’s leading insurance brokers has spoken of increasing confidence levels among businesses in the city.
Speaking to The Munster Express, Oliver Murphy of Oliver Murphy Insurance Brokers Ltd, said that talk of a positive, albeit gradual pick-up in the mood of the city wasn’t idle, wistful speculation.
“Irrespective of where you are, in any city or county in Ireland, there are going to be negatives that some of us can choose to fixate or harp on about,” Mr Murphy prefaced.
“But for me, there is little to no doubt that people can and do draw inspiration from positive messages, and the more of those we get out around Waterford, in my view, the better. And there are good things happening in this city. And I’ll take issue with anyone who says that that isn’t the case.”
When asked if businesses around the city were more optimistic now than they were, say, two years ago, Oliver Murphy replied: “Oh they are. Definitely. The Quays itself here, over the past six to eight months, has seen an improvement with the opening of new businesses. People are beginning to take their heads up out of the sand again, and, from an investment perspective, are having a cut again, seeing if something will work. That simply wasn’t the case until recently, and having a cut is a consequence of increased optimism – confidence brings that – and that confidence is to be welcomed.”
Mr Murphy added: “It’s worth pointing out that Waterford is a great city, it’s a superb place to live – I wouldn’t want to live anywhere else – and I think an awful lot of people are beginning to feel a bit better about themselves in business, certainly the people that I’ve been talking to, anyway.
Oliver Murphy Insurance Brokers, which now employs 18 full-time staff, is celebrating 20 years in business and made the move from 14, The Quay to their new, expanded premises at Gladstone House (Gladstone Street/The Quay) last February.
“We’ve a long-standing affinity with the city centre, we loved trading here, The Quay is a lovely place to do business, and we never really considered taking it to a business park or another out of town premises when we were seeking to move, and we’re absolutely thrilled to be based in Gladstone House now. And while there are those who have taken issue with the works on The Quay, when I look out my office window every day, I see traffic, I see people going about their business, and the buzz of both is, from my perspective, a good thing.”