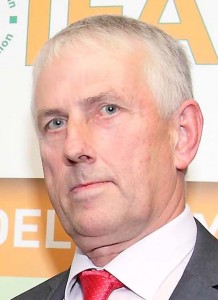 Waterford IFA Chairman John Fitzgerald has described the absence of 24/7 cardiac care services and a second Cath Lab at University Hospital Waterford (UHW) as ‘a scandal’.
During an extensive interview on WLR’s ‘Saturday Show’, Mr Fitzgerald said that the death of farmer Thomas Power on June 18th “brought it home to an awful lot of farmers, not only in Waterford, but in Wexford, Kilkenny and South Tipperary – I’ve been speaking to colleagues in our neighbouring counties over the past few weeks – and they’re fully behind the (UHW) campaign”.
Mr Fitzgerald added: “I think, maybe by our nature, we’re more likely to call the vet than the doctor. We’d call the vet in a second; we tend to put off going to the doctor but I think it’s a basic right that we have 24/7 cardiac care here in Waterford, an absolute, basic right. It’s a pure scandal that we haven’t it. We’re a massive region of 400,000 to 500,000 people and we have primitive (cardiac) care – you’re only meant to get sick between nine and five in the day – sure that’s not on. As well as that, you’ve no chance of making either Cork or Dublin in an hour and half. No chance.”
He continued: “This is the very issue as we had when it came to cancer care and we had to fight for that as well, to make sure we had that service based in the region. We’re a growing region and we have every right to the appropriate level of cardiac care. I think there are 12 cath labs in Dublin serving a million people, while we have one here serving up to a half a million in the south east and it’s not open on a round the clock basis.”
And farmers find themselves at greater risk than most on the cardiac front given that they can find themselves alone in their work for vast periods of any day. “The most important tool that most farmers have at the moment is their mobile phone,” said John Fitzgerald.
“But because they’re working by themselves, the number of people who have been saved after a farm accident by being able to ring a neighbour or a relative who will come to their aid, and it’s the same for someone with chest pain, they can be found on a farm easily now whereas, before we had mobile phones, someone in trouble on a farm mightn’t have been found for a day, too late in most cases. There’s a unity of purpose coming about here in Waterford that we have to get the proper level of cardiac care, in that we have to get it. There can be no second guessing about this, no temporary cath labs, nothing like that.
“Why shouldn’t we have it? It’s a basic human need. We’re not a third world country and the cost of providing it is negligible. We have to stay united on this, speak with one voice on this and demand it. No second guessing on it. We have to have it.”