Hennebique Mill to be demolished

Waterford City & County Council voted unanimously yesterday evening (Monday) to demolish the Hennebique flour mill building on the North Quays.
The R & H Hall Grains Store is the last remaining structure on the quays, with it also signalled out in recent times as one of the final physical links to Waterford’s industrial past. While there were calls for it to be preserved in submissions to Waterford City and County Council (WWCC), the building has never been included in the Record of Protected Structures. 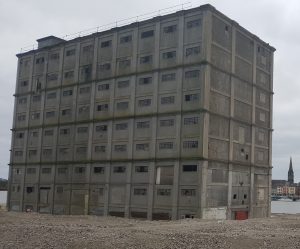 Set for the wrecking ball: the Hennqbiue Mill on the North Quay.

Deputy CEO and Planning Director Lar Power outlined how difficult it would be to include the building in the proposed €300 million development involving Al Hokair.
“It’s important to realise we’re actually talking about something that was built for grain storage in 1905. The clear floor to beam height is only 3.2 metres and there’s a myriad of columns inside it in a grid. If it was brought back into any use, it wouldn’t look like what it looks like right now because after insulating the building and wrapping it from the outside and putting windows in it…so what you see today, you would never see again if it was even to be retained,” he said.

Cllr Joe Kelly (Ind) asked the Deputy CEO if the further development of the North Quays by Al Hokair is reliant on the removal of the building. In response he said WWCC could not find a use for the building as part of any future development:
“We considered hotel uses, we considered museums. The building would change so much and there would be nothing of the original left. This is nine stories – it would have to merge with another building that could be two or three stories. That just doesn’t work without blowing out some of the ceiling. It’s not practical that it remains, and it’s on a strategic site.”

The demolishment will commence in a number of weeks. One reoccurring submission from the public was that there could be a significant impact on the wharf and jetty directly associated with the grain store. Lar Power told the chamber there will be a 3D laser survey carried out on the structure and that there is no proposal to demolish the jetty and wharf.
The motion to demolish the building was the only item on the agenda for the evening and was proposed by the Deputy Mayor, Cllr John Cummins (FG); Cllr Eamon Quinlan (FF) seconded.