Dutch cheese and dairy producer Royal A-Ware, in conjunction with Glanbia Ireland, is to build a new, €140 million continental cheese manufacturing facility in Belview. The plant, which is scheduled for commissioning in 2022, is to produce continental cheeses in a range of formats. When fully operable, the new plant will boast a production capacity of 450 million litres of milk per annum. Approximately 80 full-time jobs will be created at the facility while a further 100 temporary jobs will be created during its construction phase. 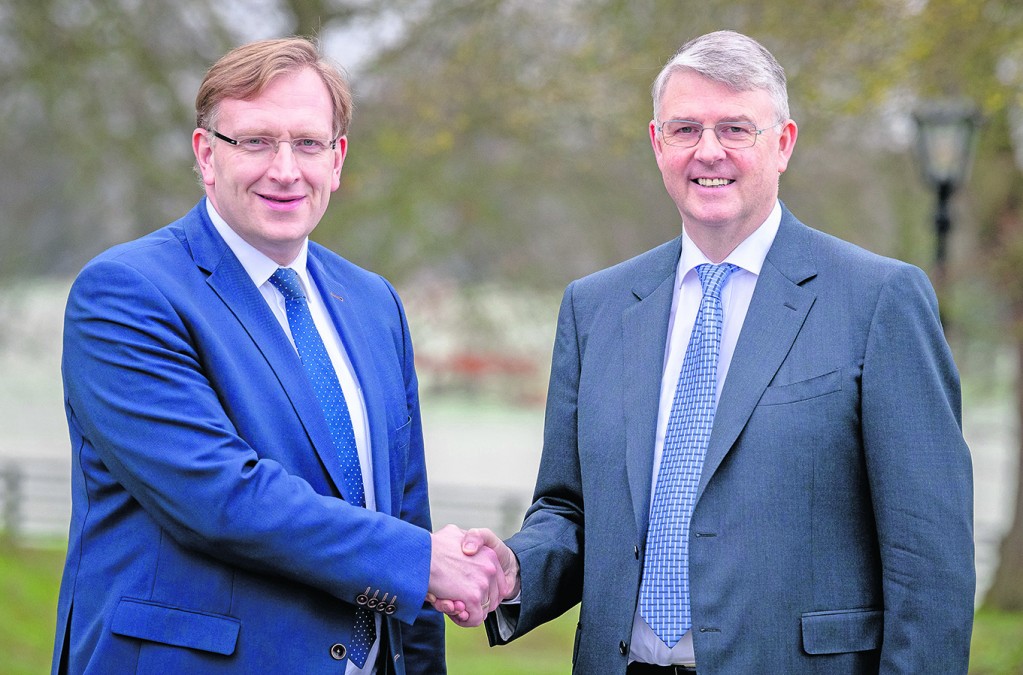 Pictured at the announcement of the new partnership which will lead to the construction of a new cheese production plant at Belview were Jan Anker (Chief Executive of Royal A-Ware) and Jim Bergin (Chief Executive of Glanbia Ireland). The new facility will have a production capacity of 450 million litres of milk per annum and is scheduled for commissioning in 2022.

Milk used in the production process on site is to be sourced from local suppliers while the cheese will be marketed and sold to global customers. “We are delighted to partner with Royal A-Ware, a leading global producer of continental cheeses, to build a world-class cheese plant in the South East of Ireland,” said Glanbia Ireland CEO Jim Bergin. “This new partnership will create a new route to market for Glanbia Ireland suppliers’ milk and diversify our portfolio of consumer dairy products and ingredients. Since 2014 we have invested €343m to facilitate a 42 per cent increase in milk production by Glanbia farmers. This proposed new investment is now required to diversify our product mix and to ensure that our suppliers have the opportunity to fulfil their growth ambitions.”
According to Jan Anker, CEO of the Royal A-Ware Group, added: “We are proud to announce this partnership with Glanbia Ireland. With this announcement, Royal A-Ware is taking another step towards achieving its goals of working with strategic partners to build innovative and sustainable agri-food chains and offering its customers an enhanced product portfolio. It also gives our company access to additional volumes of high-quality cheese through a local supply chain.” Said Minister for Business, Enterprise and Innovation, Heather Humphreys TD: This announcement of international collaboration between Royal A-ware and Glanbia Ireland is welcome news for the south east region. Growing jobs at a regional level is a key focus for government and with the looming challenge of Brexit, supporting economic growth in our regions through such actions as product diversification, thereby helping to create sustainable and quality jobs, is a huge priority for Government.”
The Minister added: “I would like to congratulate Glanbia Ireland for their continued commitment to supporting the growth and development of their suppliers, further leveraging Ireland’s positive international reputation in the dairy sector.” Her colleague at the Department of Agriculture Michael Creed, echoed those sentiments. “The agri-food sector is Ireland’s largest indigenous industry supporting over 174,000 jobs across rural Ireland, from farms to food processing. Investments like this cheese manufacturing facility in Belview are a critical response to the challenges posed by Brexit, in terms of developing new products and new markets.” Welcoming the news, Orla Battersby, Head of Food Division with Enterprise Ireland stated: “This announcement demonstrates that Ireland remains at the forefront of dairy innovation for the global marketplace and an attractive location for international dairy investments.”
The proposed new facility will be located at a greenfield site near to Glanbia Ireland’s infant nutrition plant at Belview, near the Port of Waterford. Opened in 2015, the Glanbia infant nutrition plant is currently the subject of a €130 million investment to install a third drier and expand production capacity.