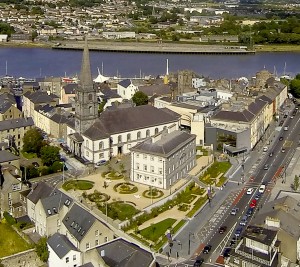 The Viking Triangle development in Waterford was led by Colliers International Destination Consulting service, which spearheaded the project’s planning during the 2010/11 period.
Colliers undertook market research, concept development, market positioning, place branding, business planning, delivery and management strategy for Waterford City Council, which led to the project securing significant funding from Fáilte Ireland.
And the end product has been named among the ‘Great Place’ Academy of Urbanism award winners at a ceremony held in London last week.
Colliers International developed a vision for the Viking Triangle as “the distinctive heritage and cultural district of Waterford city centre” that will provide a vibrant experience that will attract more visitors and encourage them to make repeat visits, stay for longer and spend more money.
This is the third Colliers Destination Consulting Ireland project to have won an Academy of Urbanism award, as the Viking Triangle came out on top in the face of competition from Greenwich Market, London and Leicester Market.
The award is one of five given out annually by The Academy of Urbanism to recognise the best, most enduring or most improved cities, towns, neighbourhoods, streets and places. Voted on by Academicians, who include leading architects, planners and developers, each award looks at a number of social, economic and environmental factors, including good governance and commercial success.
Said Roger Hobkinson, Director Destination Consulting in Ireland: “This was a great project to work on and provides an excellent case study as to how a city undergoing challenging times, took control and through proactive local leadership did the hard yards of detailed project planning to deliver a fresh story that has helped to reboot Waterford City Centre.”