WIT is Operating at University Level

The decades-old case for a regional upgrade
Dr Ray Griffin removes a weighty tome from the shelf of his office in the WIT block situated in Waterford’s IDA Industrial Estate and plants it on his desk. It’s the document that WIT presented in February 2006 when the Institute applied for university status. “That bid was based on a campaign that had been going on in the city for 40 years, up to that point,” Dr Griffin, speaking in an independent capacity, told The Munster Express. “Back in the 1970s and 80s, there was a push for a greenfield university, but eventually the solution to the proposition was to build upon the work already put in place by Waterford Regional Technical College (WRTC) and take it from there. And from that, eventually WIT applied on behalf of the community.”
Ray Griffin added: “For the better part of two years thereafter, the bid was effectively ignored and then along came the Port Report, when the government hired a consultant to review the bid and he did a one-day analysis. And on the basis of that single day’s analysis, he concluded that the third level institute he had visited was operating at university level.” “One day?” this reporter replied. “Yes,” said Dr Griffin. “One day. Now it’s worth pointing out that one day was all he was given by the then government to review it, to see if there was a case to be made, but he went much further.” 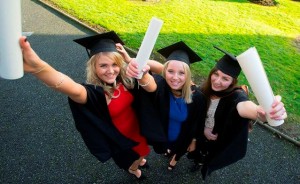 “The employment market doesn't discriminate between a WIT graduate and a Trinity graduate,” according to WIT’s Dr Ray Griffin (inset).

The 27-page document, dated July 21st 2007, includes this telling declaration: “Simply on the merits of its application, we would respect and support WIT’s view that it has many of the features of a university, and, arguably, should be considered as a candidate for university status.” Interestingly, on the same page of the report, just two paragraphs above that particular recommendation, Dr Port also states: “If it was designated, WIT would remain distinctive as a different type of institute from the existing universities with a more technological slant and a significant volume of sub-degree work. In some systems, this might be described as the profile of a technological university (in the UK, there are several types of university, some with sub-degree work and a vocational focus), but of course there is no such type of university in Ireland at present.” The TU Bill is currently being discussed in the Seanad, as we reported upon last week, and quite what would become of this process in the event of a change of government remains uncertain.
“Anybody that walks through WIT goes ‘this is a university’,” Dr Griffin contended. “There are PhDs being supervised here, there’s multi-million euro European research funding coming in here every other day and it doesn’t take an academic long to just walk through the place and recognise what we have here: a third level institute which is operating at university level. You could meet 30 different lecturers here in a row and that would make you realise very quickly that they too are operating at university level. And feeding into that, our students are university level – just look at where our graduates go?”

“The employment market doesn't discriminate between a WIT graduate and a Trinity graduate,” according to WIT’s Dr Ray Griffin

He added: “The employment market doesn’t discriminate between a WIT graduate and a Trinity graduate. If you go and work for, say, PriceWaterhouseCoopers, they hire Trinity people who sit right beside WIT people on the same money, so the market place has answered this question a long time ago.”
Does Dr Griffin feel this message is resonating with parents in the South East? “Well, firstly, we don’t have sufficient buildings currently, in spite of all the progress that’s been made to WIT’s infrastructure, which has been considerable. But let me put it to you this way. If you go to a GP’s office for the first time, you don’t know whether your doctor is any good or not. You’re trusting that they are, and how you get comfort in that is when they’re located at the Whitfield Clinic or if they’re based on Harley Street. Parents don’t sit in classrooms. They don’t read the academic papers. Also, half of what any Leaving Cert recipient wants to do is not possible in Waterford. For example, if you want to be a primary school teacher, a doctor, a dentist, an archaeologist, an economist – a thoroughbred economist, not a business economist – you can’t study any of those courses in Waterford in 2018. You’re talking about half of what’s on the CAO list not being available here – and there definitely is some status anxiety too – in that kids, and you can’t blame them, will give a course preference based on a ‘U’ in an third level body’s title. That has always been the case.”
Given the absence of those options in Waterford, does Dr Griffin feel that this course deficit might be additional fuel for those forces out there which have opposed any academic upgrading of WIT? “No,” he replied. “That’s doesn’t justify it. That is the outcome of such opposition. We have proposals here for a Medical School (with the Model Four UHW just a short drive away), for Primary School teacher training, but you try and bring that to Dublin and what will you get? ‘No, sorry, it ain’t happening’