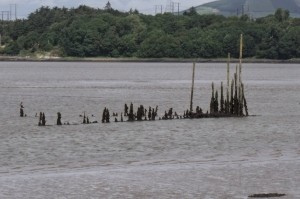 A recent submission, by Cllr Eddie Mulligan to Government on a proposed tourism project for Cheekpoint and the wider Suir estuary focusing on developing a real hands-on tourism experience based around the ancient salmon fisheries that once thrived along the shores of the River Suir has progressed to Fáilte Ireland endorsement. The project would be part of the much wider Ireland’s Ancient East and would ensure that Waterford would have a unique tourism proposal that could attract thousands to the region.
Cllr Mulligan commented, “After an awful lot of very hard work, with the Cheekpoint Community, I am delighted to be able to announce that our submission has not only been acknowledged by the Joint Committee on Transport and Communications but has been passed and recommended by Failte Ireland as strong experience to be animated under the Ireland’s Ancient East, were it in existence at some point in the future. These signs of encouragement should give the project significant impetus to drive forward and seek appropriate development funding which has to be supported by our local TD’s.
The submission focused on protecting and restoring a significant number of the historic fishing weirs on the River Suir dating back pre-Norman times. The few remaining fishing weirs are of historical significant and are worthy of conservation and preservation. In addition there could be heritage tourism potential for Cheekpoint, Passage East and the surrounding estuary.
Salmon was not just the most economically important fish to the community it was also valued due to the skill levels it would take to catch even one solitary fish. A Tourism and Artisan Food based fishing project would be more than just a prospective income source it would be a way of preserving ancient traditions and brining these lost skills back to life.
To protect and conserve this unique historic way of life, that pre-dates the Normans, a sustainable heritage fisheries model that incorporates the real added value of a tourism and artisan food experience must be a responsibility of Inland Fisheries Ireland to deliver in consultation with the local community. The Cheekpoint Fishing Heritage Project proposes the creation of a pilot project that examines the real future opportunities such a project would bring to the Cheekpoint community.”
The next step for Cllr Mulligan and the Cheekpoint Fishing Heritage Project will be to compile a business and marketing plan and this will form the basis for seeking the necessary support funding to pilot the project, according to Cllr Mulligan.
In addition Cllr Mulligan will be seeking the support and backing of his fellow Councillors across the City and County to help bring this project to fruition.
Finally, Cllr Mulligan believes that such a unique offering will draw a significant number of new tourists to the region, “There can be absolutely no doubt that once we get this project up and running we will see significant numbers of increased tourists visiting the whole region. In terms of what you could experience this would be a unique offering. You could well be catching your own salmon, dressing it, and then either smoking the fish yourself or cooking it with the help of one of our wonderful City or County chefs. And of course the final icing on the cake would be the pleasure of tasting and eating a wild salmon caught by your own hands. Priceless!”