Mayoral elections to be held this week 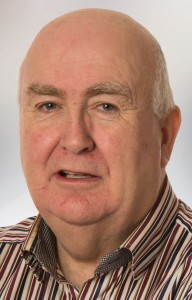 Cllr Pat Nugent, who is set to take the City & County Mayoral Chain.