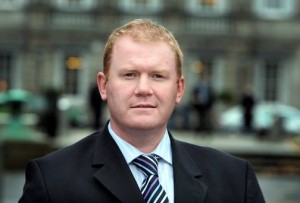 Minister of State Paudie Coffey been selected to run for Fine Gael in the next General Election by members of the party who attended the selection convention in Leamybrien last (Monday) night.
Minister Coffey, elected to the Dáil in 2011, was appointed as a Minister during his first term as a TD.
“Over the last four and a half years I have worked on behalf of all the people of Waterford and I have given 100 per cent commitment to ensure that Waterford’s economy recovered from the worst economic recession that it had ever experienced.”
Minister Coffey added: “With a General Election within sight; it is important that who we elect will to continue to implement the necessary policies to ensure the economic recovery isn’t reversed.
“As we have seen from Greece it does matter who people elect to run their country; the electorate have a stark choice between political rhetoric that will bring chaos or a politically responsible government that will ensure credible policies are implemented that will copper-fasten the economic recovery.”
Minister Coffey, who was nominated at the convention by Cllr Lola O’Sullivan and seconded by Cllr Seanie Power
Minister Coffey concluded: “I believe that this election is the most important general election in a generation and I will not be taking any vote for granted. It is important that we continue to stick with the Fine Gael economic plan that is delivering an economic recovery…and if I can receive the support of the Waterford Electorate, that I serve as a Minister in any new government that is formed after the next general election.”