"I won't let Waterford down"

David Cullinane in upbeat mood at general election campaign launch
“David is a person I’m proud to call a friend, a star in our party, a key member of our leadership and has been, without question, the outstanding performer in the Seanad over the past four years and I have every confidence in my friend, my colleague, my comrade, David Cullinane.”
That was the rallying call made by Sinn Féin’s Deputy Leader Mary Lou MacDonald at the launch of Senator David Cullinane’s general election campaign at a packed Granville Hotel on Friday last.
And while it would be incorrect to describe the atmosphere in the Granville as presumptive or triumphalist, it’s fair to say that there was an excited sense of anticipation about Senator Cullinane’s chances of winning election to the 32nd Dáil. 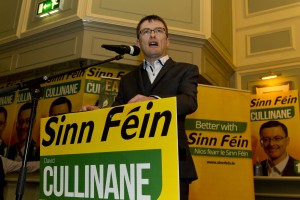 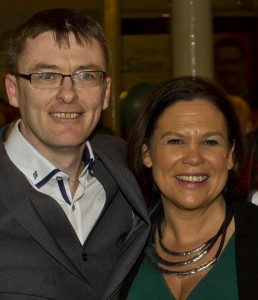 Sinn Féin supporters clearly fancy their chances of returning a candidate to the Dáil to represent the people of Waterford, and there’s no doubting that Senator Cullinane is “a very real and genuine prospect”, as Deputy MacDonald put it, of landing a seat. “I’d be very hopeful indeed that David will be returned to the Dáil.”
While not too concerned about bookmakers’ odds on his chances of election, Senator Cullinane feels if he can improve on his 2011 first preference haul of 5,500 ‘number ones’, then he’ll be well in the hunt to win a seat. “I’ll be pointing flaws in government policy, where I feel Fianna Fáil have fallen down and continue to fall down on, I’ll be conducting a positive campaign, based on our realistic and fair policies in housing, childcare, health and decent work for decent pay, and I’m looking forward to engaging with the other candidates in the weeks between now and polling day.”
Senator Cullinane said voters face a “clear choice” when it comes to election day: “They can choose the austerity, cuts and elitist politics of Fine Gael and ‘Fine Gael-lite’, as in the Labour Party, or they can choose the progressive alternative represented by Sinn Féin.”
He added: “My party is on the side of the ordinary people of Waterford, those who, over the last eight years, have been made pay the price for the financial gambles of the rich and the privileged in Irish society. A Sinn Féin government would act in the interests of the citizens of Ireland and not for the benefit of the pampered golden circles who have been protected and insulated by Fine Gael, the Labour Party and Fianna Fáil.”
Reflecting on the seven public meetings he has chaired in Waterford over the past 18 months, Senator Cullinane believes he and his colleagues on the ground have done a great deal of “heavy lifting” in the build-up to the election. “I think people recognise that I have done my very best to make the most of my time in the Seanad, and of course that’s helped my profile in terms of this election, I can’t deny that. And how that will be viewed by the people of Waterford will be revealed come the election.”
He added: “We remain committed to deliver a fairer recovery and better country for our children. In government, Sinn Féin would implement policies to end the two-tier health service which has seen University Hospital Waterford firmly in the grip of the health crisis brought about by the current government – we’ve had many commitments made in relation to UHW but those commitments are not being equalled by actions, and this simply has to stop.”
Re-iterating his commitment to tackling “the housing crisis head-on,” David Cullinane said his party would oversee a “massive social housing build programme that would get people of the streets, out of emergency accommodation, and into homes where they belong”.
As for how a fair and progressive tax system would be introduced in a manner not yet implemented in Sinn Féin’s view, Senator Cullinane added: “I’ve never hidden from our firm belief that those who can afford to pay a little extra do so in order to fund world class hospitals, schools and public infrastructure.”
As for why he should earn the trust of Waterfordians at the ballot box, David Cullinane said: “When you elect a Sinn Féin representative you know that you are getting somebody who will fight your corner every day and who will be a strong voice within a party for real political and social change of this island.
“And I will work every day to ensure that Waterford is not a secondary consideration when it comes to the issues of employment, regional economic development and defending our rural towns and villages. I cannot put it more plainly: I will not let you, the people of Waterford, down.”
* Interestingly, and certainly (one suspects), partly for the local media’s benefit, at the end of last Friday’s press briefing with Senator Cullinane and Deputy MacDonald, the next and only person to meet with both privately prior to the function was former WIT president Kieran Byrne. We’ll have more on WIT and what both Sinn Féin representatives had to say on the ‘TU’ process in next week’s edition.