A Night For Billy 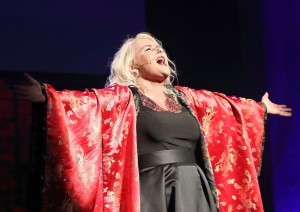 Michelle Condon as director/choreographer assembled a stellar cast; a Who’s Who of Waterford luminaries with musicians, dancers, comedians, performers, technicians, choirs, and Joint Musical Directors in Wayne Brown and Kevin O’Carroll to celebrate and ‘tip the hat’ in ‘A Night For Billy’.
The capacity audience represented a glorious cross-section of family, friends, fans, political and cultural and another stratum of Waterford’s musical theatre fraternity.
Billy McCarthy was a Deise darling, a consummate broadcaster who had a word and time for Taoisigh, leaders, sports stars, captains of industry, showbiz personalities as well as Kitty from the city and May on the roundabout.
During the night video inserts displayed that broad-ranging talent and brought a sparkle of tears and sentiment, private and public memories. There was laughter to leaven sadness.
Richie Hayes got the show off to a beautiful start with ‘American Pie’ (the day the music died). Vanessa Whelan soared with ‘O Mio Babbino Caro’ (a song for the beloved).
Madrigallery added two Michael Glynn songs to the mix, and Padraig O’Griofa let the comedy loose with The Bilberry Goats in a hilarious Waterford Symphony.
Carrie Crowley touched the hearts with the plaintive Kathy Mattea song ‘Where Have You Been?’
David Flynn and Richie Hayes rekindled Eurovision memories with ‘Rock’n’Roll Kids’ and husband and wife duo, Andrew Holden and Gabrielle Cummins sparkled with ‘Somewhere’ (a time and a place for us).
Playwright Jim Nolan recited the WB Yeats poem ‘Among School Children’, and Dermot Keyes caught the mood of a ‘restless world’ and ‘the moment I can feel that you feel that way too’ when signing ‘When I Fall In Love’.
Clodagh Power caressed the sentiments of ‘Bewitched, Bothered and Bewildered’ before Richie Hayes gentled into the interval with ‘One For My Baby’ (and the music was easy and sad).
After the interval, another video caught the flavour of Deise AM, and it was beautiful to hear Billy recite the Shakespeare Sonnet 30 ‘When to the sessions of sweet silent thought’ (all losses are restored and sorrows end).
Vicki Graham and Jamie Murphy warbled ‘The Song That Goes Like This’ from Spamalot and Greta Rochford was a divine ‘dahling’ in ‘Diva’s Lament’. Donna Roche was powerful and inspirational with ‘Climb Every Mountain’.
Carrie Crowley was sublime in ‘Song Of Bernadette’ as the talent cascaded with the ironic Mack And Mabel song ‘I Won’t Send Roses’ from the wonderful Des Manahan, and Vicki Graham reprised the bitter sweetness of that song’s sentiment (just turn and go).
Brenda Giles led The Bilberry Goats in the ‘geriatric’ sketch ‘Songbirds’, and the laughter was cathartic.
The award-winning Intonations choir sang ‘Moon River’ and the appropriate ‘As If We Never Said Goodbye’ (we taught the world new ways to dream).
Andrew Holden recreated a theatrical memory of Billy McCarthy in My Fair Lady with ‘On The Street Where You Live’, and there was that golden moment of memory that Billy McCarthy was, on a daily basis, on that very street, in our lives and now in our hearts.
Then it was more video memories with ‘It Was Chaos Billy’ and Billy’s brother, Ronan touched the soul of the night with the simplicity of “Thank you for remembering Billy”.
Then the cast and ensemble sang the iconic Waterford anthem, Denny Corcoran’s ‘My City Of Music’.
There was a standing ovation, lots of tears and memories and it was more. Much, much more on an absolutely magnificent night for Billy.