The 13th annual staging of Culture Night will be held this Friday, September 21st with local authorities busily engaging with a range of arts and cultural organisations to lay on another varied and entertaining programme of events. Free tours on the hour (starting at 5pm, with the final tour at 9pm) will be available at the Medieval Museum, incorporating the 13th Century Choristers’ Hall and the 15th Century Wine Vault. At 6pm, events will kick off at the Theatre Royal Bar via the Viking Triangle Culture Trail, before swiftly moving downstairs!
From 6.15pm, the Theatre Royal will host backstage tours (maximum of 30 guests), giving a glimpse of the working theatre while learning more about the architectural and performance history of the ‘Royal’. The half-hour tour may also see guests listen in on a sound check for ‘Ladies In Blue’ who will be performing that evening.
Also at the Theatre Royal, ‘Live At The Vestibule’ will run from 6.45pm and 7.45pm for an hour of live performances, featuring upcoming and established local singer/songwriters (051-874402/www.theatreroyal.ie). 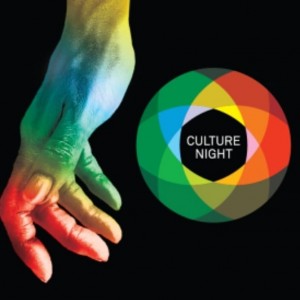 From 6.15pm, Brick Lane (off Greyfriars Street) will play host to ‘Voices And Music’, hosting a performance from Waterford Youth Arts, followed at 7pm by a collaborative piece involving City of Waterford Brass and the award-winning Mount Sion Choir. From 7.45 to 8.45pm, the De La Salle Pipe Band will perform a series of traditional numbers on the front plaza of the House of Waterford Crystal, while the Barrack Street Band will perform at Bailey’s New Street from 8pm to 9pm. Meanwhile, the Campervan of Sound return to Cathedral Square for an acoustic session which will be hosted by local acts including Fallaway House, Dave Lofts and The Knotted Chords. Garter Lane will be a hive of activity from 6pm to 9pm, with a family-friendly printing workshop for children aged 5 to 12 being provided by artist and printmaker Anne McDonnell (from 6 to 7pm). At the same time, also at Garter Lane, WIT’s Department of Creative and Performing Arts will present a multilingual rehearsed reading of ‘The King of Spain’s Daughter’ by Teresa Deevy, followed by a short Question & Answer session. Artists will also be in attendance at Garter Lane, with Denise McAuliffe hosting a speed painting demonstration between 7 and 8pm. From 8 to 10pm, the Vintage Parlour Tea Rooms will host a night of theatre, music, choir, old fashioned dance and play readings, while an evening of spoken word and performances by local playwrights will be hosted (upstairs) at the Vintage Factory, also on O’Connell Street, also between 8 and 10pm. St Patrick’s Gateway Centre will host a programme of Irish writing and song from 7.30pm to 9.30pm while Christchurch Cathedral will be open between 7.15pm and 10pm, with Michael O’Brien on hand to provide tours at one of our most prominent landmarks. At 8pm, Christchurch will host a talk by Erica Fay titled: ‘ Captain McCleverty: an 18th Century Explorer’s Links With Waterford.’
Modwords, the brainchild of Anna Jordan, will provide an evening of spoken word and music at The Munster Bar (7pm to 9pm) while DJs Muc and the Defektive Soundsystem will perform a set at the Wallace Plaza, again from 7pm to 9pm 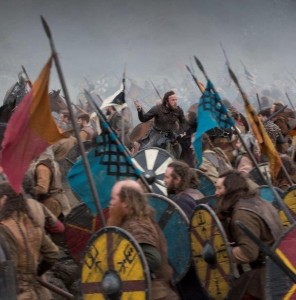 'Black '47' and 'Vikings' star Moe Dunford will launch the ‘Vikings in Focus’ photo exhibition at the Old Market House Arts Centre in Dungarvan on Culture Night (this Friday) at 7.30pm.

Other Culture Night highlights in Waterford City include:
* Music, Art and a Barbecue at the Gallery of Modern Art (GOMA; 5pm to 11pm)
* Meet the Artists at 20ten on Lombard Street from 6pm to 8pm
* A ‘Flash Mob’ at the Wallace Plaza from 6pm to 6.30pm, with OK Dance performing to the sounds of DJ Yachtrock
* A short play, spoken word and music at the Fat Angel (Cathedral Square from 6pm to 7pm)
* ‘God is a DJ’, a vinyl homage to ‘The Hop’ by Slo-Set and Cwrex at the front plaza of the House of Waterford Crystal (6pm to 7pm)
* Tea Time Theatre at Momo on Patrick Street, including an excerpt from a play by Ciara O’Connor
* Live body painting at Bank Lane (6pm to 11.30pm) featuring artists and models from Southeast Bodypaint Jam, featuring a guest appearance by Dutch artist Richard Nijbore. And once the human canvasses are transformed into walking pieces of art, the models will go on walkabout!
* An evening of live music at University Hospital Waterford (UHW) from 7pm to 8pm, featuring Liam Merriman and Eoin O’Meachair, courtesy of Waterford Healing Arts Trust (WHAT)
* Video art at Numbers 18 and 19, Lombard Street (6pm to 9pm) featuring ‘Sugar’, a video installation by multimedia artists, Trish Dolan, Michael Foy and Brenda Carroll
* Visual Art at Shine Discovery on Barronstrand Street (5.30pm to 9pm) featuring a visual art group exhibition titled ‘Random Acts of Self-Kindness’, in addition to a recycling workshop
* A range of talks, exhibitions, music and spoken word at The Rogue Gallery and Studios on Michael Street from 5pm to 11.30pm
* David Lyttle featuring Lucian Gray and Conor Chaplin will perform at Phil Grimes’s in Johnstown from 8.30pm to 12 midnight
* A one-hour guided citywide tour (7pm to 8pm) of the Waterford Walls murals, assembling at Waterford Walls HQ at George’s Street
* An evening of performances at The Bearded Lady on Michael Street (8pm-9pm)
* A craft beer trail between 8pm and 11pm, starting at Phil Grimes, and moving onto the new Yellow Belly Bar (previously Dignity) and from there to Revolution Bar
* Children’s events at Ardkeen Library (11am to 4pm) and Central Library on Lady Lane (11am to 6pm)
The Culture Night Finale will be held at the Cathedral Square Chess Board between 11am and 11.30pm (the performers remain a closely guarded secret!) while the after party will be hosted by Jordan’s Bar on The Quay, with music from The Sax Offenders.
Meanwhile, Tramore Comhaltas will perform at Tramore Library from 5.30pm to 6.30pm while guided tours of the Lafcadio Hearn Japanese Gardens, including a special reading of Sean Dunne’s ‘A Shrine to Lafcadio Hearn’ will be held between 6pm and 7pm.

The Dungarvan area will host three major Culture Night events:
* The Joan Clancy Gallery at An Rinn (5pm to 9pm) will feature the works of leading artists, including Katarzyna Gajewska, Rayleen Clancy, John Cullinan and Blawnin Clancy. Local musicians will also perform from 7.30pm to 8pm – followed by canapés!
* ‘Vikings’ star Moe Dunford launches the ‘Vikings in Focus’ photo exhibition at the Old Market House Arts Centre (7.30pm to 8pm). This is an exhibition of spectacular ‘behind the scenes’ photos taken on the set of the TV series ‘Vikings’ by Jonathan Hession and Bernard Walsh.
* The Drama Circle will present a forum for all like minded souls at Merry’s Bar (Lower Main Street, 8pm to 10pm) who share stories, poetry, monologues or scenes from plays, original or classics for what should make for an interesting session

Finally, in Carrick-on-Suir, three venues will host the evening’s entertainment:
* ‘Different Voices’: Live music at Carrick-on-Suir Library from 6.30pm to 8pm, featuring a range of performers, including the all-female Belle Voci choir from Clonmel
* Live music at Brewery Lane Theatre (6pm to 10pm) featuring local musicians, a children’s film and a talk by local author Jack Ryan about fictionalising his experience in Carrick
* And there’ll be two short films at the Chapel in the Nano Nagle Community Centre: ‘Tales from the Towpath’ (8pm, 5 to 10 mins), a film which captures the history, stories and even a few secrets of the River Suir – and ‘If Anyone Asks’, a film mini-series which was co-ordinated by the Tudor Artisan Hub especially for Culture Night 2018.