Katie Kim: My Life in Music

Waterford native and renowned songstress Katie Kim recently played Saint Patrick’s Gateway in the city to an enraptured crowd. And The Munster Express recently caught up with the Irish folk singer to talk about her musical journey…

Where did you grow up and what was it like?

I grew up in the Williamstown/Grantstown area. It’s considered the city now, but it wasn’t when we were there. There are a lot of housing estates there now but when we lived there, it was corn fields and narrow roads. We lived opposite Rabbit’s Hill, which we used run across to every weekend. I’m getting nostalgic!

What were your first experiences of music?

Growing up I can remember my first musical influences being musicals. Sound of Music, Annie etc. Then I heard my sisters listening to Madonna. But I didn’t really understand what is was to be a fan until I discovered Queen. That was my first “Oh” moment – the vocals – still Freddie Mercury’s vocals give me chills. I was probably 10 or 11. Then Mariah Carey hit. And I decided I wanted to do what she did. Then it was a long road of discovering so many different genres of music.

How did you begin your career in music?

For my 14th birthday my mother bought me my first guitar, taught me a few chords and I went from there. I have no training and didn’t have voice lessons or guitar/piano lessons. I was never great at covering music; I was always drawn to writing for myself. I played some small ‘open mic’ nights for a few years, and then in a bar I was working in I met Terry Cullen. Somehow after a chat about wanting to join a band, I ended up living in his house and playing in his band ‘Dae Kim’. Terry had been previously signed to a record label in Ireland so he was well versed in touring and recording. So we did that too. Toured around a Europe a bit and after a few years, we went our separate ways, completely amicably and I decided to start playing solo. 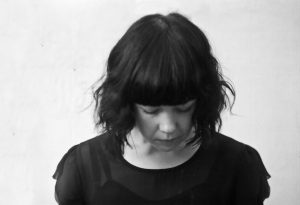 What comes from me sitting down and writing is what happened at the time I sat down to write. Influence wise, to be honest, it’s hard to answer that question, because although I’ve admired artists and their music, I think it’s a general awareness of everything going on around you that influences you. Books, films, art, relationships, family, friends, news, bad days, good days. All of it influences me.

Your new album ‘Salt’ has been described as a new departure in your sound. What has influenced this change and how do you see it progressing?

John ‘Spud’ Murphy (a close friend of Katie’s) is the short answer. He’s played in many different guises with Katie Kim over the years and has his own studio in Dublin now. I’m completely comfortable around him; where I’m normally a very private person regarding the writing and recording process, with him it was infinitely easier.
As far as how I see things progressing musically, I’m still trying to work them out myself. But I’m not interested in lurking around familiar territory.

What has been the most proud moment of your career to date?

Being part of The Waterboys WB Yeats project, which brought me to amazing venues and onto ‘Later With Jools Holland’. Really, my proudest moment is composing a score for a beautifully surreal silent film called ‘La Coquille et le Clergyman’ for The French Film Festival. When we played that composition live in Cork, Agnes Varda, a historically prolific and talented French director attended that performance. Meeting her and her presence at that performance, I’ll never forget. It holds very dear for me.

What were some of your favourite venues to play?

The Hammersmith Odeon with The Waterboys. We were in the same tiny dressing room that David Bowie used before his last Spiders From Mars concert. THAT was amazing.

What advice would you give to other singer song writers beginning their careers?

Oh lord! I’m still seeking advice myself! But the main piece of advice I would have would be don’t focus on looking for “success”. Keep doing what you’re doing. Keep making music. Of course take advice on board but if you lose track of what you started out trying to make, then you’ll eventually get tired. Don’t aim to please other people. Don’t give up. Irish music is more exciting than ever.

You can listen to Katie Kim’s new album “Salt” on Spotify or Deezer. Keep up with Katie Kim’s music and tour dates at https://katiekim.bandcamp.com/