Tramore musician Rebecca McCarthy-Kent took home the Seán Ó Riada Gold Medal and a cheque for €2500 at the final held in Cork’s Rochestown Park Hotel on Friday last. There were 17 participants in the Final, which this year focused on the fiddle. Rebecca (23) plays both classical and traditional music and also composes, with a special interest in classical/trad fusion – fiddle and piano are her main instruments. She is currently studying for a Masters in Traditional Music Performance in The Irish World Academy of Music and Dance in the University of Limerick, and is a qualified primary school teacher.Rebecca comes from a musical family, her mother Áine and her father Stephen play music, and her sister Jana is a talented flute player. 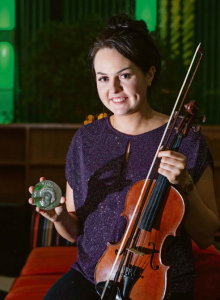 Rebecca has 70 pupils under her care in music classes in Comhaltas Ceoltóirí Éireann in Tramore, where she is in charge of the Grúpaí Ceoil Under 12, Under 15 and Under 18, as well as running music classes every weekend. The victor expressed her surprise and delight to be announced as the winner. “I was in absolute shock that I won and couldn’t believe it for ages, but I’m over the moon. It’s a particular honour to have won a medal named after Seán Ó Riada.”The final was presented live on RTÉ Raidió na Gaeltachta by musician and composer Peadar Ó Riada. Rebecca was one of four musicians from Waterford who competed in the final, and there were also three musicians who flew in from the United States for the event.
The Seán Ó Riada Gold Medal is an annual traditional music competition run by Peadar Ó Riada, son of Seán Ó Riada, on his RTÉ Raidió na Gaeltachta music programme Cuireadh chun Ceoil. The competition has a four-year cycle, and is focused on a different instrument in each of those years – fiddle / flute and whistle / pipes and harp / metal reed instruments (concertina, box etc). The winner receives the bespoke Seán Ó Riada Gold Medal, designed by the late Cashel silversmith Pádraig Ó Mathúna. The medal features an engraving of Seán Ó Riada on one side, and a design inspired by the Dán of Aimhirgín on the other. The medal is created in solid silver, and after the competition it is engraved with the winner’s name and the year, before being coated in gold. The judges pick the finalists from the initial entries ‘blind’ – they do not know their names, but work from recordings they have submitted. The emphasis in the competition is on musicality, not technical brilliance.