Small pubs fight back with their own craft beer 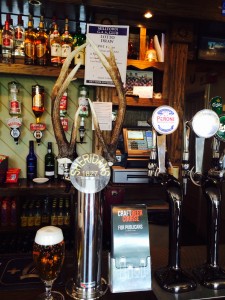 Tuam publican Joe Sheridan, who will be selling his own beer come August 16th.

News this week that many hard-hit small pubs across the country are fighting back and intend to establish their own micro-breweries and pull pints of their own craft beer for customers.
The concept is being actively supported by the Vintners federation of Ireland that sees it as an income boost for bar owners.
Recently, a group of 30 publicans from different parts of the country attended a workshop run by Tuam publican Joe Sheridan and supported by the Galway company, Brewsmart Ltd.
Mr Sheridan, who has been testing various recipes, doesn’t see micro brewing as the catch-all saviour of small pubs but he does believe it could be a vital money earner.
It takes him three weeks to brew a beer with all natural ingredients and no chemicals or additives.
His beer will be on sale in his own pub from August 16th and it will also be sold in two other pubs run by his brothers.
He said that personalised craft beer was an owner-led initiative with small overheads and he expected there would be at least one-hundred pubs selling their own product within a short time.