Portugal is loved by the Irish.

It is an alternative to Spain, lower in costs generally, but a fresher climate, perhaps more suitable to Irish. We did get rain, but found a new area to discover.

Most visitors from Ireland pick the Algarve, been there twice, and for those on city breaks, Lisbon.

However, a number of years back at a Portugal promotion we were persuaded to check out Alentejo. The pandemic knocked the plan sideways but we did a few days there recently and sought something a little different and saw the country side.

Staying in a Dutch owned farmhouse style accommodation there were 5 rental apartments pre season, two were occupied by Ukrainians  refugees, one had 3 teenage children and said her home was in Kharkiv in east Ukraine and her home had been bombed and destroyed and  host Lucia, a good Christian, took her in.

Lucia is very enterprising. Her husband runs the farm and she manages tourism accommodation and also does accredited  tour guiding of the city of Evora, a former Roman settlement, later a university town dating back to the 1500s. The Moors came here to Evora too. 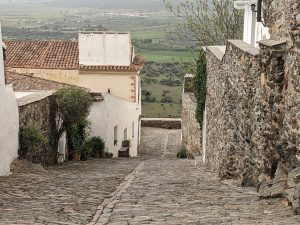 Being Portugal, a fairly Catholic country, there are lots of fine churches here. One had a room full of bones, others had great architecture from various periods like Baroque or Gothic names.

There was a Jewish community there too but they had to leave like in Spain after the Spanish Inquisition.

The palace and gardens are well worth a visit. Some performing live peacocks hang out here too, with their amazing plumage.

There is a city museum telling the story of the city‘s origins and that of Portugal and its royals.

Some fine sculpture too of Vasco de Gama, the explorer, even though we are over an hour and a half inland by car.

The local markets are lively with fresh produce of fish, meats, fruit. Locals rather buy items there than a supermarket as they are more traditional. Evora is making a play for a European City of Culture in 2028  and is a rival of Braga and Sintra . One of their aims said Lucia is to renovate older buildings and get them used for education as a university faculty branch or visitor usage. Evora is termed a World Heritage City by UNESCO.

The Romans were here and an old temple structure is still visible. The Moors conquered it in 715AD and was re conquered in 1165 by Portuguese kings and nobles.

The Templar Knights had defeated the Moors around Portugal.

It hosted a Royal court for a period then Coimbra became more important and Lisbon.

The Spirit College in 1551 founded by Henrique, Cardinal King and in 1559 became Evora university, so it has a bit history and great markets too.

The university closed in 1759, after the expulsion of the Jesuits and then was re-opened again only in 1973 as a university for the region.

The Church owned huge lands and locals rented farm land from the church for centuries.

They seem to have a progressive council and could well achieve its goals of Culture Capital given all these pointers .

The nearby countryside has many bounties from wines, olives, cereals like wheat, sunflowers, fruits- oranges etc and animal rearing too. You see fine Charolais and Limousin  in the fields and we tasted some fine steak later in a class  restaurant served on a hot plate in wood as it still cooked on a table as we ate, not too unusual by all accounts.

The pace of life in this city the same size of Waterford was pleasant and a change from the Algarve or the busy capital of Lisbon.

We visited a nearby town of Monsaraz, an old fortified town on a rock overlooking the Guadiana river that separates Spain from Portugal in places.  Well worth the trip, very quaint streets. The castle and fort are being restored and tourists come here to buy crafts like wool rugs and art.  You would need a car to reach Monsaraz and nice journey too on quiet roads mainly. This walled town is described as a jewel and was built by the famous Knights Templar who fought the Moors and put Portugal back in the hands of the local kings. They had exhibitions to the town’s Jewish and trading origins. We even found a reference to Celtic and megalithic burial stones and a Killarney tree.

Nearby, São Pedro do Corval is famous for colourful pottery, the country’s largest pottery centre. On the way there we found a large reservoir, Alqueva, to save water, as winter rainfall is not plentiful, so irrigation is needed for crops, Otherwise, you feel you step back in time.

You certainly feel that you stepped back in time.

You can stay in guest houses and investigate the narrow streets. We had a nice coffee in a café on a balcony overlooking the nearby houses with lots of outdoor pots  and flowers and the plains of Guadiana underneath. Worth an hour or two and enjoy the drive on back roads with little traffic apart from local farmers some in old German vintage Mercedes that they like here, as they are reliable.

This whole area is a discovery for visitors and is the real Portugal compared to the top tourist locations in summer, you see native tourists but not many non nationals.

Evora is also on walking trails such as the Sao Miguel de Machede, a 23km walk or the Viana do Alentejo going the other way, which is over 30km and are Camino style walks for spring or summer.

The area is very undeveloped for tourism so take advantage while it is that way, trains from Lisbon connect to Evora in a 2 hour journey or rent car.

Breakfast extra 10 euro person and also picnic option 12 euro. Use of swimming pool and horse back riding option too.

For going into town and out there is a local taxi service and one nearby restaurant, but there is self catering option too and warm stove.

Nearby also to Evora is Viana, which has a castle and a palace, you can reach by bus or hired car, beautiful white painted houses, lots of flowers and colour in the spring in this laid back town that was on a pilgrimage route. See the convent of Sao Francisco with the palace and is open to public and mass said also on Sundays and other days.