A remarkably polished yet emotionally raw collection, Woman is a daring synthesis of Bird’s songwriter roots and passion for, among other genres, soul, it’s eleven songs long but 37 minutes short: pointed, powerful, and packed with truths and levity. Written and almost exclusively performed by Bird, with regular associate Marcus Wüst as co-producer – Woman is Bird’s transparent attempt to speak out against injustice and counteract apathy through bold, blunt confessionals. “Like most artists, I’ve probably shirked my responsibilities at times so as not to rock any boats,” she confesses. “But I decided it was time to change that.” 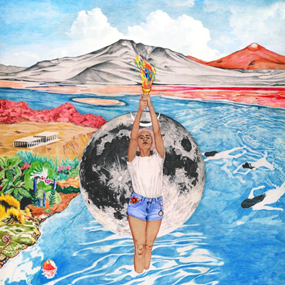 Bird’s goal now is to animate and agitate, best demonstrated by the album’s bookends. ‘As the River Flows’ is dedicated to Alan Kurdi, the three-year-old Syrian refugee whose body was photographed in 2015 on a Turkish beach, and it’s intended, she reveals, to dispute ideas of the ‘right kind’ of immigrant.
The closing ‘Repeal’, meanwhile, is a moving response to Ireland’s 2018 abortion referendum, a call to arms and a reminder that “what’s good for me is good for you”. Immensely personal, with spoken contributions from Bird’s own girlfriend and prominent activists, its crescendo of voices – including a recording of the roar of uncontainable joy which greeted the result – sends shivers down the spine.
These aren’t the album’s only political gestures. ‘Grace’, for instance – originally called
‘Dick Bag’ – tackles Donald Trump’s ascent, “but,” Bird says, “I don’t even like mentioning his name.” ‘Love Respect Peace’ was written as a mantra, “in the hope of someone singing these words out loud, even subconsciously,” and ‘Woman Oh Woman’ is “my proud gay homage to beautiful songs where men used words like ‘woman’ as pride and protection.” A poignant declaration of love, it takes as inspiration tunes like George Harrison’s ‘Something’ and Elvis Costello’s ‘She’, whose sentiments, she explains, “always made me wish for the day I could express such things to my partner. Now I’m there.”
‘Brutal Honesty’ deals with the urge to put one’s emotional house in order, and ‘Time Is Not Waiting’ – something Bird feels may be “my best work in years” – offers a gentle pace so effective it stretches time, denying its mere three-minute duration. Such tenderness is also evident in ‘Life Is Long’, whose recollections of a family weekend in West Ireland encompass a vital carpe diem mindset: “Life is long/ But the time is short.”
Elsewhere there’s the Prince-like funk of ‘Salve’ – a warning about social media’s more poisonous effects, ‘I Know What I’m Offering’s low-slung groove and shimmering strings and ‘That’s What Life Is For’, which epitomises, in its subtle but effective embrace of gospel and soul, the sizeable musical leaps this fiercely independent singer-songwriter has made.
Wallis Bird has released five albums since 2007. She has won two Irish Meteor Awards, Ireland’s annual music prize – mostly recently for Best Female Artist – and her prestigious 2017 German “Musikautorenpreis” (Music Author Prize), as well as two nominations for the Choice Music Prize, Ireland’s equivalent to Britain’s Mercury Prize. This year she was also nominated as Artist of the Year at the 2019 International Folk Music Awards. She has performed some 800 shows this past decade, with her gigs often heralded as legendarily passionate, energetic and good-humoured. Among her admirers is Amanda Palmer, no live slouch herself – “My jaw hit the floor,” she’s said of watching Bird play – but Bird’s modest enough to be equally, if not more thrilled by her growing international reach, with a substantial European following boosted during her last tour by concerts in Australia, New Zealand, Canada and Japan.
This time round, though, Bird knows there’s more at stake. At Woman’s heart lies the concurrent urge to tackle injustice and celebrate the good in human nature, themes demanding immediate attention. “I want more empathy in the world around me,” she concludes, “so I’ve started by writing it into my life. I want to fill rooms with these words. I want to hear these sentiments uttered out loud, and for people to get used to hearing themselves say them. Ultimately, I want these words written into their lives.”
And thus,an age old proverbis once again validated: no matter how hard they try, you cannot keep a goodWoman down.
Wallis will play live at Theatre Royal Waterford on Saturday January 4th as part of her ‘New Moon’ Tour 2020.
Tickets at €23 on sale now from Box Office or www.theatreroyal.ie