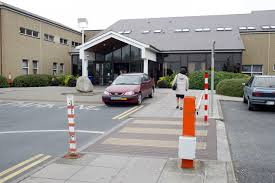 24/7 service at UHW could hit throughput in Cork/DublinThe possibility that University Hospital Waterford (UHW) could take crucial after-hours ‘business’ from hospitals in Cork and Dublin has emerged as a key stumbling block behind the development of 24/7 cardiac care in the south east.
At a meeting with acting Health Minister Leo Varadkar and top HSE officials in Dublin last week, Independent TD for Waterford Deputy John Halligan said he was enraged to be told that any decision to open a second cath lab at UHW on a 24/7 basis must take into consideration the current number of cases being referred to Cork or Dublin at evenings and weekends – and how this would affect throughput and funding at the latter hospitals.
Deputy Halligan, as a member of the Independent Alliance, has been engaged in high-level talks with both Fine Gael and Fianna Fáil for several weeks on the possible formation of a minority Government led by one of the parties.
He told The Munster Express that he has spent over 100 hours in discussions in the hope that agreement can be reached on a stable Government – and also to establish what either party would deliver for Waterford.
A key electoral commitment of Deputy Halligan’s was the campaign for a second cath lab and 24/7 cardiac cover at UHW and it’s understood he has repeatedly argued for this throughout the talks of recent weeks.
The issue came to a head last Thursday, however, when Halligan said attempts were made to ‘fob him off’ with the promise of an external review into the viability of an expanded service. ):“At the meeting, I highlighted the fact that UHW does NOT have a physician with sub-speciality expertise in cardiology on-call out of hours, as Minister Varadkar has repeatedly stated. There is huge evidence that capacity at the UHW cath lab is inadequate, with activity increasing year on year. There is an 18-month waiting list for angiograms, while inpatients with serious cardiac problems at UHW are currently waiting over seven days for their procedure. The national guideline is 24 hours. This is having a serious impact on medical bed occupancy.”
A business case prepared by UHW management has estimated that the capital cost of a second cath lab would be €4m, which includes the relocation of the orthodontic unit. Ongoing revenue costs for the second lab would be in the region of €3.7m annually.
Deputy Halligan said its opening could rectify the increasing waiting lists, as well as give UHW the infrastructure and staffing levels where 24/7 heart attack care is deliverable. However he was told by health officials at last Thursday’s meeting that a key factor in deciding whether Waterford qualified for a 24/7 service would be the volume of PPCIs (primary percutaneous coronary intervention, or emergency stents) performed per year.
“When I asked what the Waterford figures were, I was amazed to discover that these top level health officials had turned up at the meeting with the figures for every other designated cardiac centre in the country except Waterford.
“I was told that there was an ‘issue with data collection’ in Waterford. Neither could they provide figures for the minimum number of PPCI interventions per unit per year necessary to warrant a 24/7 service.
“Then the crux of the issue emerged: a health official said it was not as simple as just presenting the Waterford figures, as an examination would also have to take place on how 24/7 service in Waterford would impact on the current number of PPCI cases being referred to Cork or Dublin.
“It seems these cases being pulled back into Waterford would affect their funding – as in the patient follows the money – as the number of cardiac surgeries being carried out by consultants in Cork or Dublin per week would drop. It was suggested that these cases instead going to Waterford could in fact effect whether Cork or Dublin qualified for having a 24/7 service.”
Deputy Halligan has since obtained the relevant Waterford figures himself, which show that the number of heart attacks treated with emergency stents (STEMIs) in UHW (9-5pm) for 2013, 2014, & 2015 were 98, 87 and 80 respectively. Additionally, in 2015, a further 77 out of hours STEMI referrals went to another centre so that, effectively, UHW had 157 STEMI referrals for emergency heart attack stenting in total.
In comparison, the 2014 figures provided to Deputy Halligan at last Thursday’s meeting show that Galway had 179 cases in 2014, Limerick had 176, Cork had 144 and in Dublin the Mater had 143, St Vincents had 95 and St James had 196. The British guidelines from 2014 state that the minimum number of cases per unit per year should be 100.
Hence, Deputy Halligan argues, there is no clinical argument for not having primary 24/7 heart attack care at Waterford. “What I was told at that meeting, regarding how 24/ 7 care in Waterford would affect the other centres, would suggest that Waterford has been acting inferior clinical care to allow the Dublin and Cork population to have a higher standard of health care. This is outrageous.”
* Willie Doyle of the 24/7 Cardiac Care for Waterford and the South East group has said campaigners now firmly believe that Waterford and the south east are being deliberately discriminated against in order to maintain patient numbers at hospitals in Dublin and Cork.