A BOY’S WISH TO WALK

Waterford fundraiser off to a fantastic start

A fundraising campaign aiming to raise €100,000 to send a four-year-old boy with cerebral palsy to the United States for life-enhancing surgery is already approaching to the 20 per cent mark, to the exasperation of his parents. The ‘Noah’s Wish To Walk’ campaign was officially launched at the Greenway Manor Hotel on Wednesday evening last, with a series of high profile funding events already pencilled in both at home and abroad over the coming months. 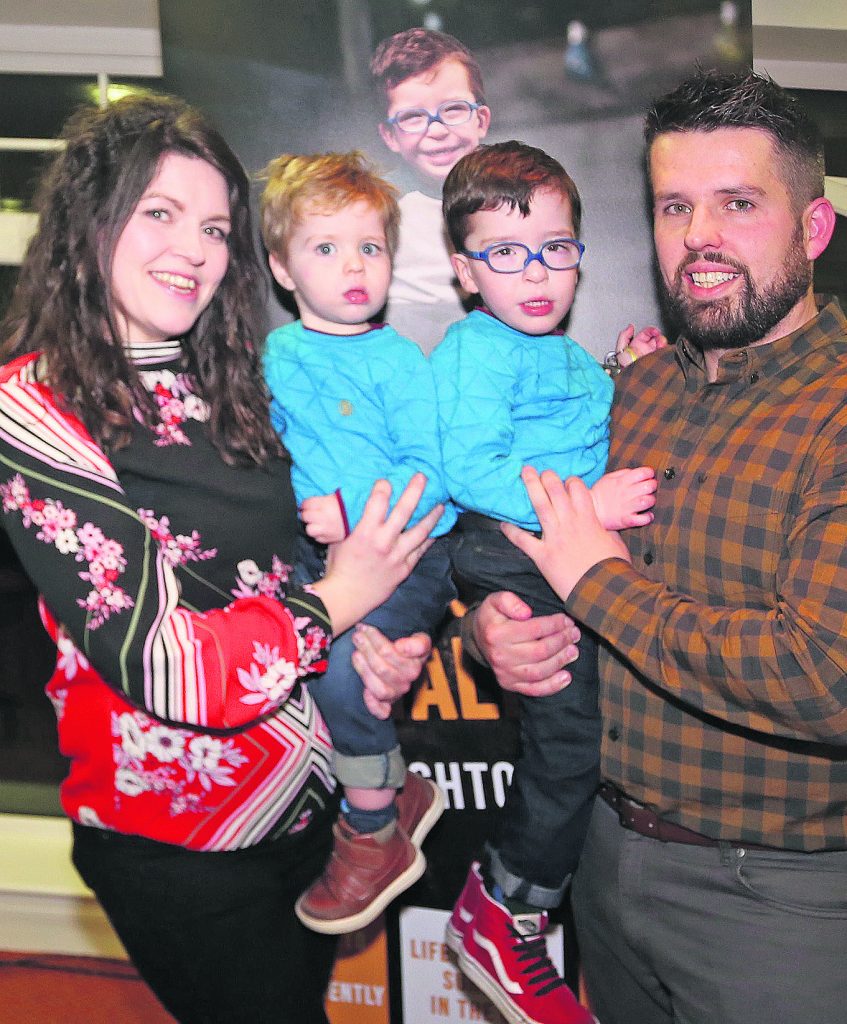 Debbie and David O'Sullivan pictured with sons Noah and Jack at the launch of the 'Noah's Wish To Walk' campaign which was held at the Greenway Manor Hotel on Wednesday evening last. | Photo: John Power

Speaking to The Munster Express at the launch, Noah’s mother Debbie described the initial reaction to their campaign from right across Waterford as “unbelievable”. “People have come out of nowhere to support us,” she said. “We just never imagined it was going to be this big. We haven’t actually had to ask anyone for help. Everyone has come to us and offered to hold different fundraisers for us. We’ve been blown away by the support.” Noah (who was born at 29 weeks) has been accepted for spinal surgery (Selective Dorsal Rhizotomy to give it its official title) in St Louis, Missouri this October for an operation which aims to eliminate the spasticity in Noah’s legs, thus giving him the opportunity to learn to walk independently.

The surgery, which is not available in Ireland, leaves the O’Sullivans with no option but to travel to the US this autumn in the hope of changing Noah’s life for the better. Speaking at the launch, fundraising committee member Freddie Hatton stated: “He’s a tough little warrior and if anyone can succeed in this, Noah will.”
): Several high profile local figures have already committed to doing their bit in helping Noah’s family reach the €100,000 mark – and as of Wednesday last, the tally already stood at an impressive €17,000. De La Salle teachers, former Waterford hurling manager Derek McGrath and washing machine carrier extraordinaire Enda O’Doherty will be joined by well-known speaker Bryan Tehan for a motivational night at the Tower Hotel on Saturday, February 16th.

Meanwhile, world-famous adventurer Pat Falvey will lead 50 locals to the summit of Carrauntuohil in support of Noah on Saturday, April 13th while former World Kickboxing champion Lynne O’Shea (nee McEnery) will climb Mount Kilimanjaro in March in aid of the campaign. And a 12-hour treadmill marathon at Core Fitness on the Dunmore Road at the end of March will see a team of fundraisers covering the equivalent distance of Mount Everest. “We never expected this level of support,” said Debbie, “but we’re just so grateful to have it. Things are hard enough as it is. We’ve a lot of things to do for Noah, to make everything the best it can be for Noah, and for Jack of course so to have other people come on board to do all of this pretty much for us, to organise all of these events for us, we couldn’t be more grateful.”

The O’Sullivans formally found out about Noah’s acceptance for surgery in July of last year. Debbie added: “We’d been looking into the surgery for two years and we always knew ourselves that he’d be a good candidate but once we got it in writing last July, we decided to kick off the fundraising and that’s obviously gone up a notch in the past few days.” When only 13 days old, Noah was transferred to Temple Street Children’s Hospital in Dublin having suffered two brain bleeds, in addition to hydrocephalus and meningitis.

Aged 18 months, Noah was diagnosed with Spastic Diplegia Cerebral Palsy due to these early conditions.
Noah’s Cerebral Palsy means he cannot stand or walk safely without support. As Freddie Hatton told a packed function room at the Greenway Manor Hotel: “Noah’s body is in a constant battle against him, forcing him into an extreme tip-toe position every time he tries to use his legs. He cannot sit freely or comfortably without a chair. He has poor balance and finds it difficult to transition from one position to another.” Freddie continued: “All of these simple movements are a major challenge to Noah. He has attended physiotherapy since he was just four weeks old – before he was even due to be born – and he has physio every single day. Thankfully he’s improving all the time. Noah is a determined little boy who works so hard, but to achieve control over his movements and progress to the next level, he needs the surgery in St Louis to eliminate the spasticity which dominates his body. Beyond walking independently, the surgery would also help to stop painful muscle spasms which wake Noah most nights and which get worse with every growth spurt. It would allow him to interact with his friends at eye level and encounter so much more socially.”

The €100,000 required will account for the surgery itself (€55,000 approximately), the trip to St Louis (€5,000 approximately) along with three years of intensive post-surgery rehab (€20,000 in Year 1 and €10,000 each in both Years 2 and 3). This will help Noah achieve the maximum benefit from the surgery and reach his full potential.” “We’ve been amazed by the support we have received from so many different people,” said Noah’s father, David. “From the motivational night at the Tower to the climb of Carrauntuohill, we know we’re going to go a long way towards reaching our target, and we’re so grateful to the support that so many good people in Waterford have committed to in aid of Noah. Bit by bit, I know we’ll get there.” A fundraising breakfast will also be held at No 9 Restaurant in Barronstrand Street this (Tuesday) morning between 9am and 12pm, with WLR broadcasting their ‘Deise Today’ show live from the popular city centre eatery.

* Speaking at the launch on Wednesday last, boxing/kickboxing coach Billy O’Sullivan made an appeal to hotels or “anyone with a major space available” to help him out in staging a charity fight night in aid of Noah O’Sullivan. “The Tower would help me, I just know they would but unfortunately it’s closed for renovations at the moment. We ran nights like this before and I know we could raise anything between €20,000 and €30,000 in a night. But we don’t have a venue available to us, and I’ve tried out a few locally and we’ve been knocked back so anyone who knows someone who could help us out with sorting out a venue, we’d be very grateful for some assistance.”