A fitting farewell to Brendan Bowyer 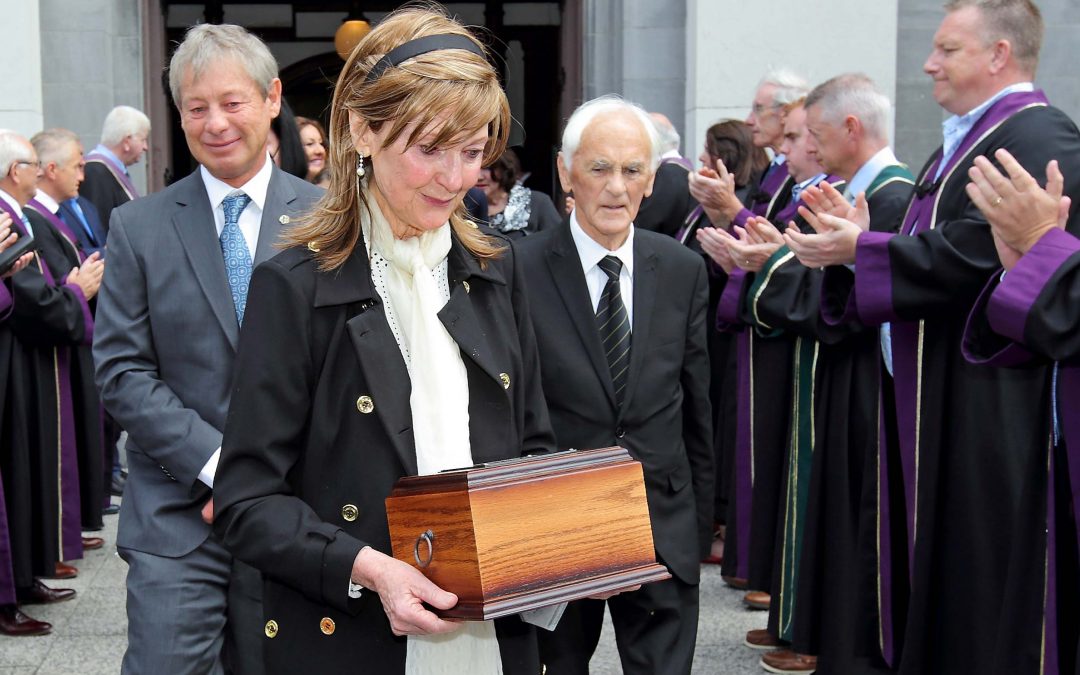 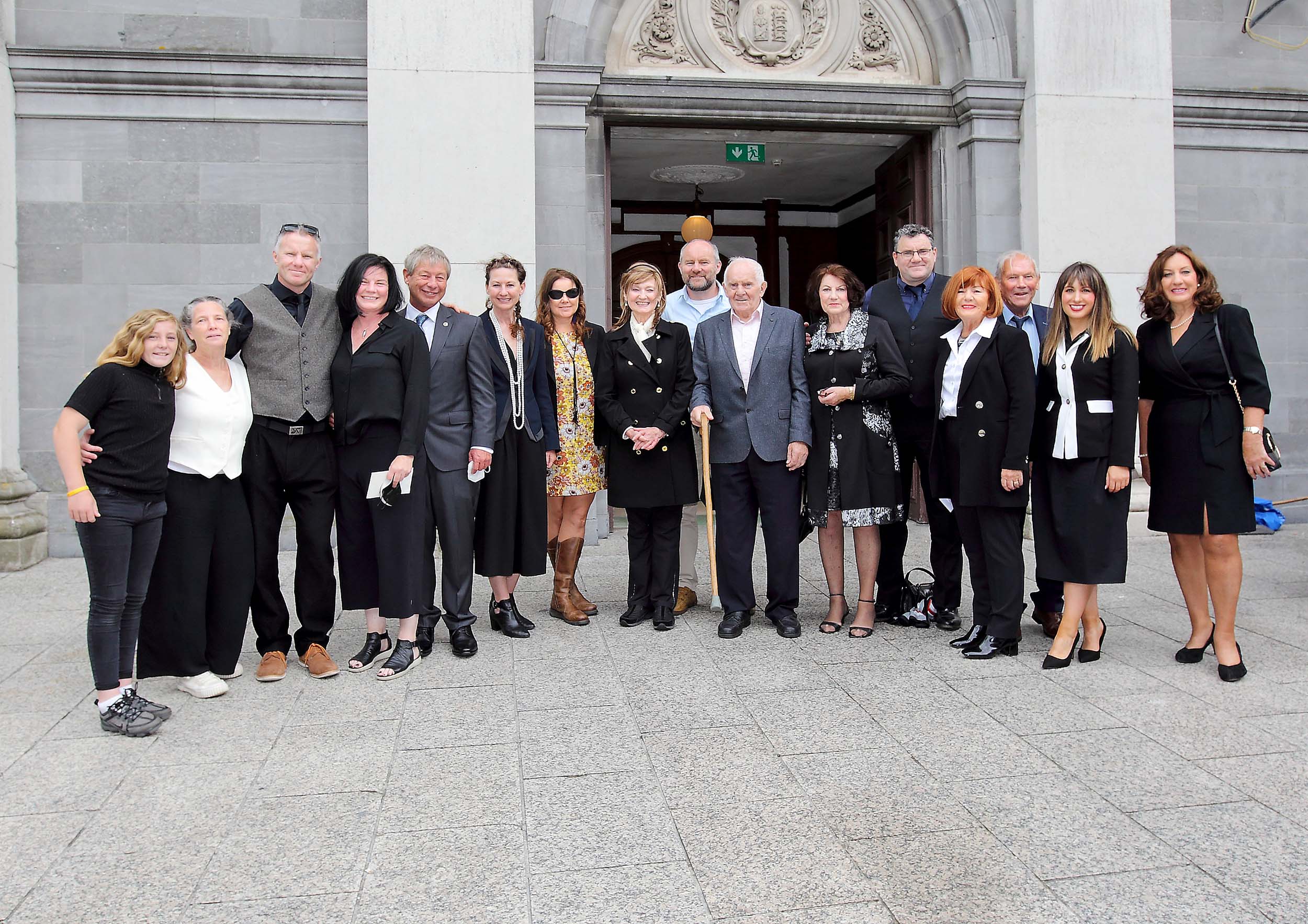 And so, there we all were, gathered together in the heart of the old city. On a warm August day, the Cathedral of the Most Holy Trinity was packed to overflowing.

Everybody knew that Brendan Bowyer had died in Las Vegas over two years ago. We’d heard the news. But, for many, the reality didn’t sink in until they saw the casket that contained his ashes lying before the High Altar. It really was all over.

In the sacred place where Brendan’s father had been organist and choirmaster for so many years and where the future star had sung as a boy, the people of Waterford and from all over the country came to pay tribute and say goodbye.

It was a fitting farewell for the singer who was Ireland’s first genuine pop star, a man who has remained a cherished household name for over 60 years.

As a Freeman of Waterford, Brendan’s Requiem Mass was attended by the mayor, councillors and officials of the city and county, attired in their civic robes. There were many famous and well-known names present but, for the most part, it was the plain people of his native city that came out to honour Brendan and show their solidarity to his grieving wife and family.

The chief mourners were Brendan’s wife, Stella; his children, Brendan Jnr, Clodagh and Aisling; his sisters, Olive, Patricia and Alison; and his grandchildren, Liam and Nora.

At the invitation of the family, the main celebrant was Fr Brian D’Arcy who has long been fondly regarded and held in high esteem as Chaplin to the entertainment industry but especially to those from the showband era. He was joined by Fr John Harris, Cathedral Administrator and by Fr Eamonn O’Driscoll who travelled from Killarney to participate. 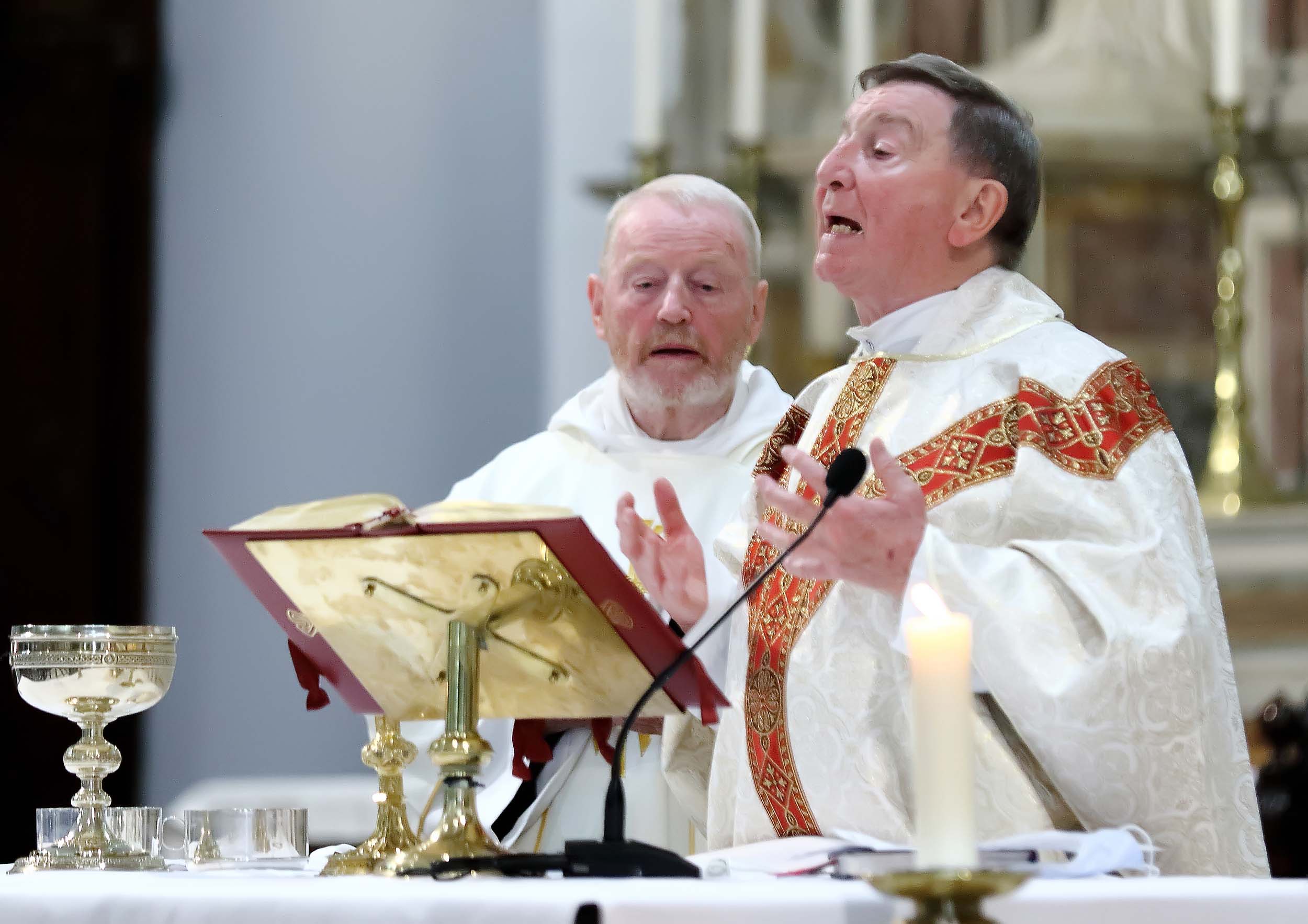 Fr. Brian D’Arcy who was the chief celebrant.

Fr Brian explained to the congregation that the Mass they were about to hear was a ‘Short Congregational Mass’ written by Stanley Bowyer in 1966 and revised by David Forde in 2017.  The organist was David Forde and the soloist who stole the hearts of everybody with her inspired performance was Caroline Reid O’Brien.

The opening music was a recording of Brendan singing ‘I Walk With God’ and his soaring voice that echoed throughout the cathedral and onto the street outside was a reminder of just how good a singer he was. Later, his beautiful recording of ‘Going Home’ was also played. As I sat among the congregation, the famous quote attributed to Saint Agustine came to mind: “Those who sing, pray twice.”

The Readings were delivered by Brendan Jnr and Aisling Bowyer and Prayers of the Faithful were recited by Brendan’s other daughter Clodagh, his sisters and grandchildren.

In Fr Brian’s homily, he spoke of his personal friendship with Brendan and the other members of The Royal Showband whose music, he said, had changed his life, and the lives of so many other people, for the better. He reminded those present of just how important a role The Royal had played in the creation of the new and emerging Ireland and he acknowledged the presence of two of the three surviving members of the band, Eddie Sullivan and Charlie Matthews. He sent best wishes to Gerry Cullen who wasn’t well enough to attend.

Fr Brian also conveyed a message of sympathy from the Bishop of Waterford and Lismore, Alphonsus Cullinan, who would have been in attendance but was abroad on pilgrimage.

Referring to Brendan, Fr Brian recalled the words of poet Brendan Kennelly who had described his own father as being ‘in tune with himself’.’ “Brendan Bowyer,” he said, “was a man totally in tune with himself and the older he got, the more in tune he became.”

Fr Brian also referred to Brendan’s successful battle with his addiction to alcohol revealing that Brendan believed his greatest achievement was not the accumulation of so many No 1 hit records but rather his ability to remain sober for 38 years. “And,” added Fr Brian, “that sobriety instilled in Brendan a wonderful spirituality that was plain to see.”

Brendan’s ashes were later carried away for burial in Dunmore East and I  thought of Elvis and his ‘long, black mystery train’ and I also thought of what the science-fiction writer and film maker, Ray Bradbury, had to say about death:

“The years go by. The time flies. Every single second is a moment in time that passes. And it seems like nothing – but when you’re looking back … well, it amounts to everything.”

Brendan’s passing has taken from Waterford the second of its Big Three, those rare, consummate performers that brought the name of their native city to huge prominence. The great Val Doonican was the first to go and now only Gilbert O’Sullivan remains of that illustrious trio and may his star shine on for many more years. 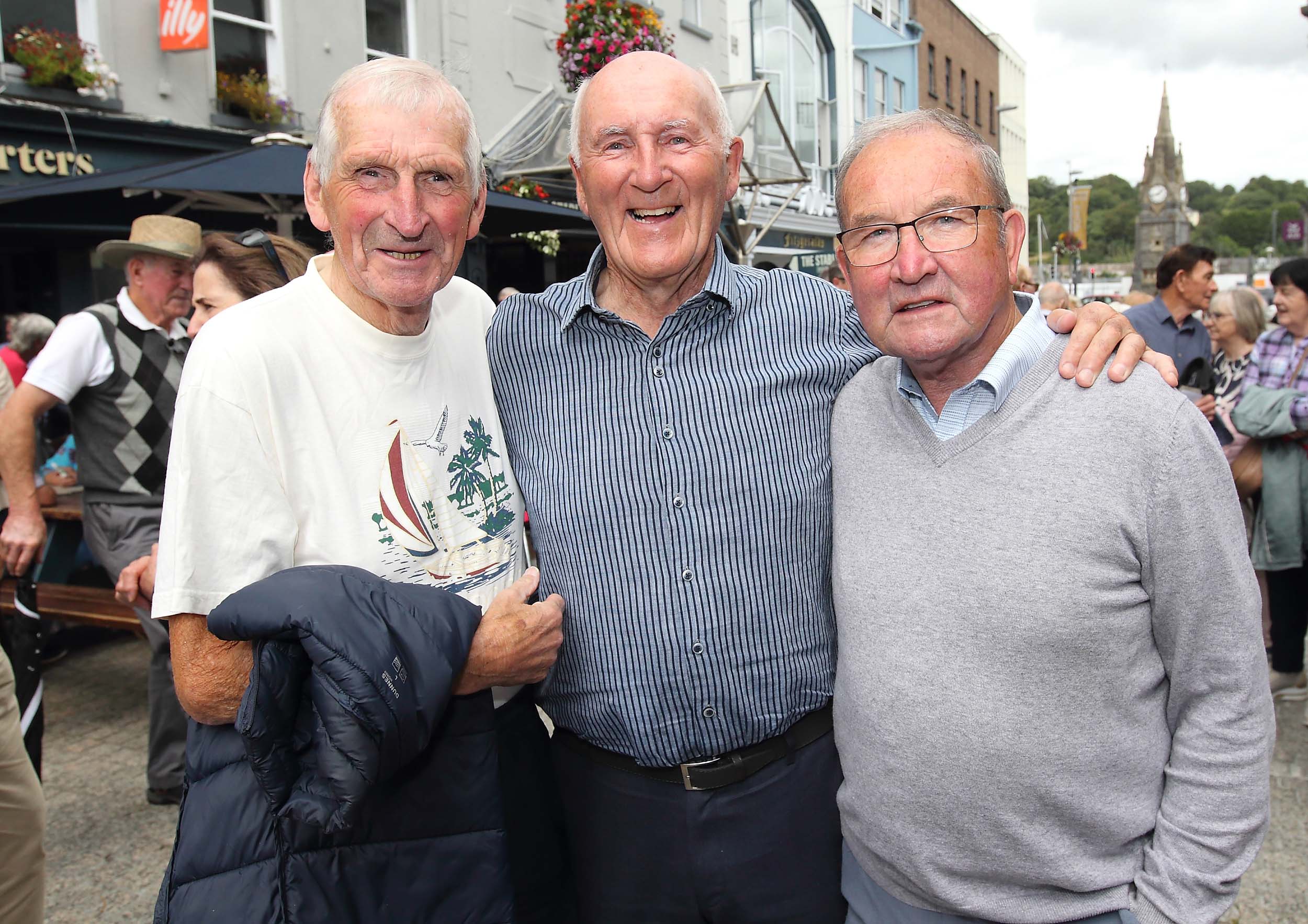 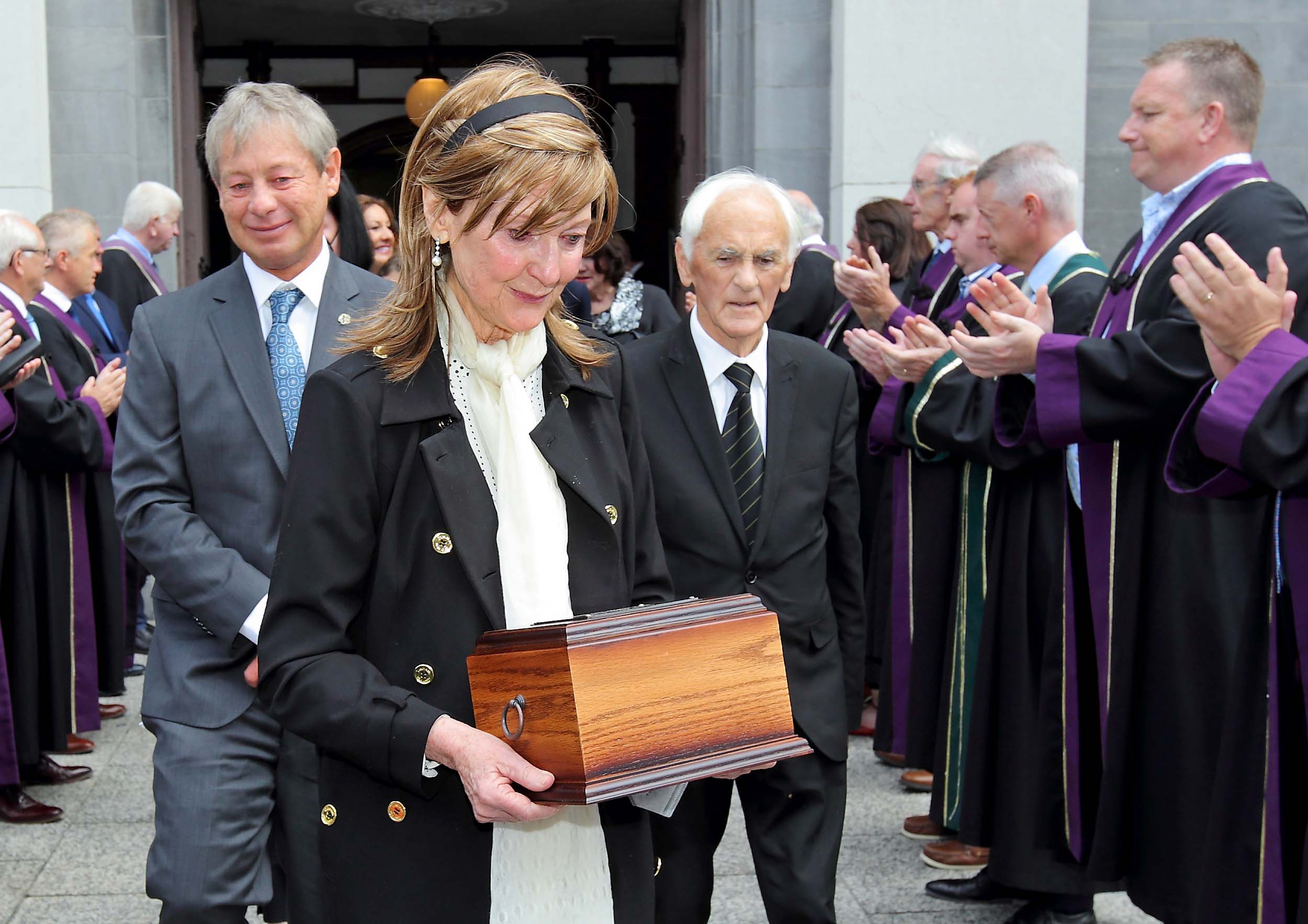 The ashes of the late Brendan Bowyer are carried from the Cathedral of the Most Holy Trinity by his wife, Stella with her son, Brendan Jnr to her left.