A Tale of Two Cities

Dermot Keyes Reports
With the Christmas season fast approaching, it’s emerged that almost a quarter of households in Waterford city are in need, a claim which pours cold water on the notion of a particularly palpable economic recovery locally.
That was the shocking statistic, and one of many worrying figures which were highlighted at the launch of the Saint Vincent De Paul’s Waterford Christmas Appeal on Thursday last.
And such a revelation felt light years removed from the €61.5 million which Waterford City & County Council has requested from the State to advance the Fawaz Alhokair Group’s North Quay project, funding which is considered an essential component if the €280m project is to get the go-ahead.
Citing the Census 2016 findings which, at the time, recorded an unemployment rate of 18.8 per cent in the city while identifying nine ‘black spots’ with jobless numbers of at least 200 recorded in each, ‘SVP’ Area President Michael Curran said that “this is consistent and reflected in the requests for assistance which we received in the city. 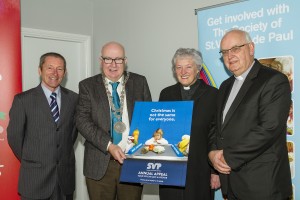 Speaking at the Society’s Area Headquarters at the Six Cross Roads Business Park, Mr Curran added: “Given that the Census told us that there are 18,211 households in Waterford city, based on the 4395 calls we received (in 2016), it appears that 24 per cent of households are in need in Waterford city. We expect that 850 families will seek our help over Christmas in the city and a total of 1500 families to seek our help over the winter in total.”
): Michael Curran told those who attended last Thursday’s launch that the Society’s average income had decreased again this year, reflecting the nine per cent decline recorded between 2015 and 2016. “The immediate repercussion of this is that expenditure was also down,” he added.
“We can only give what we have and the level of help this year has shown an increase on last year, so you can see the difficulties faced in meeting these requests.” December 2016 accounted for 16 per cent of the Society’s total calls last year, and given that the SVP’s first call for Christmas assistance was recorded in September, the level of stress among families in the city was being made evident.
Michael Curran also told the gathering about a family he visited last Christmas. “Their home was a detached house with Christmas lights visible. The door was answered by a well-presented young mother who invited me into the kitchen. The sound of children watching television could be heard and things looked comfortable. The reality was quite different and their circumstances were very sad. Dad was unemployed and was taking it very badly. The family home was to be sold after Christmas and the family were to move into her parents’ home. Christmas food and toys were a major worry.”
He added: “Mum was finding it very difficult to keep things together but her Gran always told her: ‘Get up, put on your make-up and keep up a brave face’. This was being done for the children, to try and give them a happy last Christmas in the family home. We were able to give age-appropriate toys and Christmas hampers to the family which were brought (into the house) when the children were in school. I found this to be one of the saddest I have dealt with, but the tears of gratitude from Mum upon receipt of the toys and hamper will remain with me for a long time.” In total, 627 children in Waterford received toys last year.
“We depend so much on you, the people of Waterford,” Mr Curran added. “The donation you give, whatever it is you can afford, every cent of it collected in Waterford, is used to help people in Waterford. The members of the Society of Saint Vincent De Paul are simply a means through which you directly help literally thousands of people who are struggling and often find themselves on the margins of society.”
The launch was also attended by City & County Mayor Pat Nugent (FG), Dean of Christchurch, Maria Jansson and Father Pat Fitzgerald, who represented the Bishop of Waterford & Lismore, Alphonsus Cullinan. And we’ll have more on the appeal in next week’s edition.