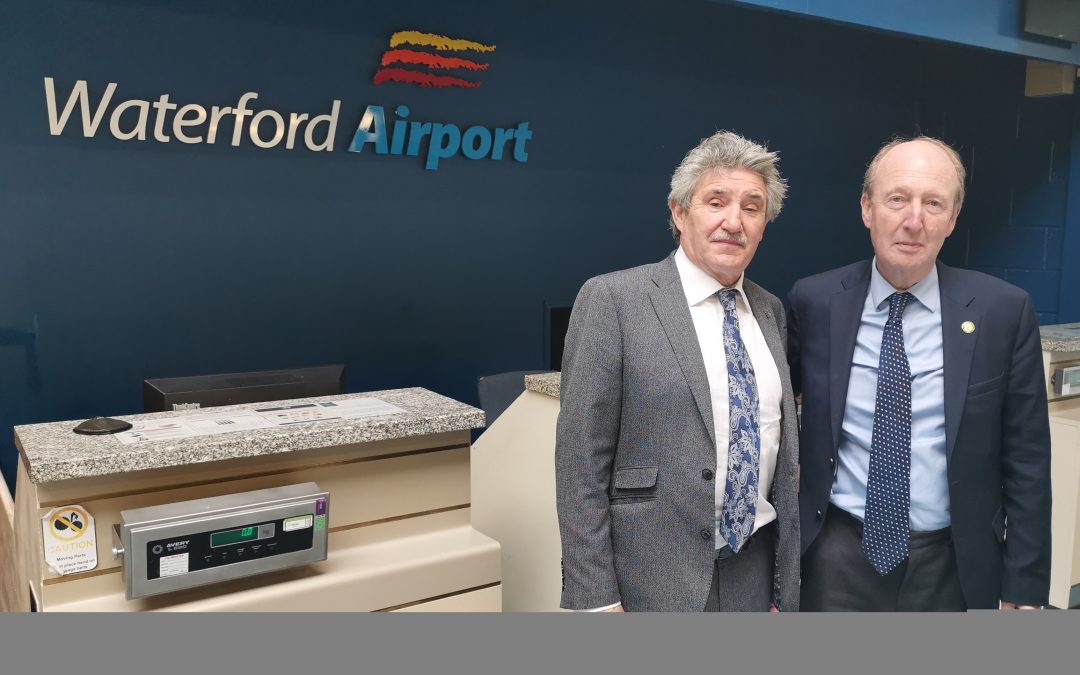 A memo is to be brought to cabinet, possibly within the next two weeks, to propose the approval of €5 million in Government funding for the long-awaited runway extension project at Waterford Airport. Speaking following a meeting with Airport Board members and regional industry and tourism stakeholders, Transport Minister Shane Ross said that “a decision about the airport has to be made in the next few weeks or months”.
Minister of State John Halligan, who facilitated the meeting at the Airport on Monday, described the pending decision as “a once in a lifetime chance for Waterford Airport to develop to its potential
“John Halligan brought me to Waterford today,” said a cheery Minister Ross following a Monday morning of meetings held at the otherwise eerily still airport terminal at Killowen.
“He wanted me to see the airport, he’s brought me down here before because we’ve got to make a decision about the future of the airport in the next few weeks and months. John brought me down because he wanted me to see what was happening, to meet various people including stakeholders, business people from Waterford, representatives from the local authority in addition to the Chairman of Waterford Airport, of course.”
It’s understood that the benefit of re-opening the airport was made plain to Minister Ross on Monday by hotelier Liam Griffin and Eirgen’s Patsy Kearney, both of whom sit on the South East Regional Steering Committee chaired by Frank O’Regan.
Minister Ross continued: “The positives were certainly on the top of the agenda today, and what we heard about were the really good reasons as to why the region needed it and we listened – I had my civil servants here with me as well – and we took into account everything they said. We have to look at it in a very balanced way and see if this is good for Ireland, if it’s good for tourism, if it’s good for business and particularly if it’s good for the South East…
all I can say is that John Halligan has been putting the case very strongly for many, many months to me and I have been listening very, very carefully. There are obviously balancing arguments but the case being made today by John and by others I met with this morning was made with great conviction.”
The long-awaited runway extension at Waterford Airport would cost €12 million in total, with Minister Halligan hopeful that a memo requesting €5m in Government funding would be brought to cabinet in the coming weeks. The remaining €7m is to be provided by the region’s local authorities, in addition to private investors. Speaking at last Thursday’s plenary meeting of Waterford City & County Council, Council Chief Executive Michael Walsh said he hoped there’d be positive news to share on the airport within a matter of weeks. Speaking on Monday, Minister Halligan stated: “I also asked a number of enterprise leaders in the region to meet with Minister Ross. That meeting focused on the need for targeted infrastructural investment in the region to improve its direct connectivity and drive enterprise growth. We spoke about how the development of Waterford Airport has the potential to impact on IDA-supported companies and on overseas tourism numbers.”
He said that that both delegations had presented a ‘highly compelling case’ to Minister Ross regarding the potential to develop the region as “a key tourism destination and business investment gateway.”Said John Halligan: “As a result of these meetings, Minister Ross is in no doubt whatsoever that this is a once-in-a-lifetime chance for Waterford Airport to develop to its potential and I am hopeful that he will take this proposal to Cabinet shortly to secure the necessary Government approval…
“In recent weeks, Minister Ross also sought the views of colleague Ministers with policy responsibility relating to regional and enterprise development. Arising from this, I held a series of meetings with those minsters – Heather Humphreys, Michael Ring and Eoghan Murphy – to argue the case for Waterford Airport and explain to them in detail the fantastic potential development opportunity this presents to the region.
“All three ministers are now in agreement regarding the potential benefits that extending the runway at Waterford Airport presents, in terms of boosting rural development, helping attract overseas companies to the region and creating new employment opportunities and assisting Waterford to expand as an urban centre as outlined in Project Ireland 2040. They’ve written to the Department of Transport outlining these views, which are being taken into consideration in the drafting of a memo for Cabinet to proceed with the runway extension at Waterford Airport.”Airport Board member and City & County Councillor John Cummins (FG) said the benefits of a runway extension had been convincingly made in a PWC report commissioned by the Airport Board.
“Over the last couple of months I have been involved in dialogue with Ministers (Humphreys, Ring and Murphy) and their advisors to ensure a positive response was forthcoming from them which I can confirm occurred, the last of which was sent a couple of weeks ago,” he said.
Cllr Cummins is confident that a recommendation for funding approval “should occur in the coming two weeks.” Minister Halligan, who was pleased with the message relayed to his Independent Alliance colleague on Monday morning. “I feel it was made quite clear today by those who met with the Minister that there is both a strong commercial and tourist case for re-opening this airport, and to have hundreds and thousands of passengers using the airport once again. This is not just about Waterford – it’s about the South East region – and we’re very grateful that Shane came to the airport today and met with so many stakeholders…and I believe a decision will be made (on the funding application) in a number of weeks.”