All Together Now Showcases Deise Gem to Gig-Goers

“Curraghmore is very much a little world on its own, sealed off from outsiders by its woods and hills, and by its ten-mile ring of its own demesne wall.” So read the opening lines of an essay penned by Mark Girouard for the February 14th, 1963 edition of ‘Country Life’.
Fifty-five years later, it’s fair to say that this stunning little world sandwiched between Portlaw and Clonea-Power has revealed itself to thousands of fresh, awed eyes in the wake of last weekend’s All Together Now festival. 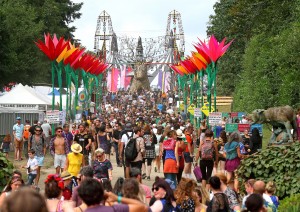 Curraghmore Estate took on a totally new gloss for the stunning All Together Now event. | Photos: Noel Browne

From Chaka Khan’s opening night Main Stage set, through to Jimmy Cliff and The New Power Generation late on Sunday evening, the seat of the Marquis of Waterford gained a novel soundtrack to heap upon its centuries of history. It’s also gained countless new admirers given how many festival goers entered the estate’s gates for the first time in what was this event’s inaugural staging.
“I worked in Waterford between 1998 and 2003, and I had no idea this was here,” said a Dubliner I met near the chairoplanes (near the Main Stage) on Saturday as our children boldly went where both of us dared not to. “It’s incredible – a real hidden gem.” Those words were not lost on this native, who could never have foreseen such a jamboree during my teenage years collecting milk (from the Estate House’s kitchen) for my Grandmother, who resided just around the corner from the ‘Big House’ for most of her life.
And as I get older, sharing stories of Curraghmore times past with those considerably younger than myself offers a reminder of just how special a place it is and how attached I am to it, now more than ever, I must confess. 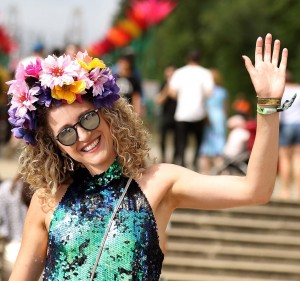 Flower power: Sabrina Carey pictured at the All Together Now festival at Curraghmore House and Gardens.

It feels like the outside world has just got in on a wonderful secret my family and just a handful of other Curraghmore-connected folk have happily been a part of for several generations.
I must admit to some mixed feelings about Curraghmore’s big reveal given that last weekend’s beautiful noise offered such a contrast to the calm and tranquillity which has long been the Estate’s trademark. But, as doyen of festivals and all round good skin Mark Graham put in on Saturday last, All Together Now has delivered “A slice of ‘Burning Man’ out in Portlaw” and in so doing “has raised the bar for festivals in Ireland”. High praise indeed, coming from a Deiseman who’s as synonymous with festivals as John Mullane is with a fist pump.
All Together Now really did have something for everyone. From comedy (Tommy Tiernan, The Nualas, David McSavage) to spoken word (Kevin Barry, Will Self, Waterford LIT) to food (Paul Flynn, Vanessa Clarke and Kevin Thornton), the variety of entertainment and insight on offer was spectacularly good. 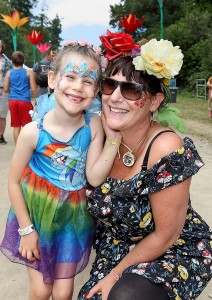 Hannah and Sarah Daly from Dungarvan all smiles at All Together Now!

The little ones had so much to see and do too, from the Big Wheel to the ‘Kids Together’ enclave (Waterford Walls, Wilder Wander and the utterly epic Disco Shed) to Spraoi’s stunning art installations, the sum total of which created an outerworldly sense of fun for kids, and all in the most beautiful of locales.
Food and drink was well-priced, a huge plus for an inaugural event, and punters in various stages of ‘festivality’ (for want of a better expression) respected their surrounds from a littering perspective, which was most welcome. 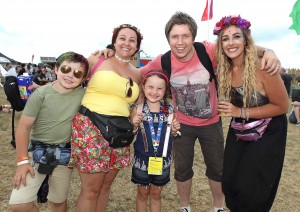 Colin, Claire, Quinn and Izzy Shanahan pictured with Cliona Gahan from Newfoundland who played at the festival.

The compact nature of the site was another major thumbs-up: there were no great trawls between venues/stages while bars and restaurants were convenient to both the Main Stage and the Belonging Bandstand (directly behind Curraghmore House). The family and boutique camping areas (in addition to camper vans) were just a lake away from the bandstand and Food and Farmers’ Market while the Campsite Village on the Farmyard Hill was directly adjacent the Main Stage. So from a layout perspective, the organisers got things completely right from this native’s perspective.
Incredibly, the lights beaming from the Arcadia Afterburner (a 360-degree art installation which emits 20 feet high flames) could be seen across the Suir in Skough, South Kilkenny during the festival’s three-night run as the day’s good vibes ran deep into the East Waterford night.
And as the de-rigging commenced this morning, we who frequent this place during its less manically fun times will relish the return of serenity and near silence which Curraghmore is renowned for. But we’ll do so thankful that so much of the outside world got a chance to share what we’ve known and loved all of our lives. And we hope they’ll come our way again next year. To all involved in bringing this festival to life, take a bow one and all. What a weekend you gave us!