A survivor of convicted paedophile Bill Kenneally says he continues to be contacted by many men in Waterford who have not disclosed their own, decades-old abuse stories to family members or the authorities.
Colin Power, one of four abuse victims who waived their anonymity in the wake of Kenneally’s conviction in February 2016, says he’s in regular communication with a range of men who’ve shared their personal stories with him.
“For a variety of reasons, they haven’t brought their stories forward, whether that’s with the Gardaí or at home with their own families,” he told The Munster Express. “And on the basis of what they’ve told me, I’ve no reason to doubt what they’ve been telling me.”
Such levels of contact have been “going on since day one, to be honest,” Mr Power stated. 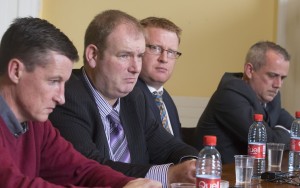 “If somebody knew Barry (Murphy) for example, it would be Barry they’d make contact with. That’s generally the way things have gone. A lot of victims have contacted us individually – and the one thing none of us have ever lost sight of is that are a thousand reasons why other victims haven’t come forward the way we did – we understand that and I can’t stress enough that we respect that. And a lot of them have told us to keep going. They’ve gotten some satisfaction knowing that when it comes to Bill Kenneally at least, well, he’s in prison now. There’s one abuser off the streets.”
Despite the burden left by both the abuse and the subsequent campaign to see a Commission of Inquiry established into sexual abuse in Waterford (now welcomingly imminent as we reported last week), Colin Power will never leave his phone off the hook when it comes to offering a supportive ear to other victims.
“I think all of the lads would say the same thing when it comes to this,” he added, before “answering that in two ways”.
Mr Power continued: “There is a time when we all need to get on with our lives because all of this has an impact on yourself, your family life, your work life, your social life – it impacts on everything. But I can safely say for any of the lads that they would say this too: we’d never not take a call. But to answer your question directly, if any victim was to ever ring us, morning, noon or night, whether it be this week, next week, next year or 10 to 15 years’ time, that would be a phone call every one of us would be glad to take. Something like this has a big impact on your life. I tried to block it out for years and pretended it hadn’t got in on me, but it has a huge impact on you emotionally, mentally and in all sorts of other ways, but it’s really important to deal with it.”
Colin Power concluded: “Of course how an individual deals with things is never going to be the same for everybody: counselling has its place and talking about it has its place, the main thing all of us would have said is to talk to somebody who you know it’s (also) happened to, because we would have the same or very similar experiences – and nothing anyone would say to us would shock us at this stage. There is real comfort in being able to talk to someone else who knows exactly what you’ve been through.”