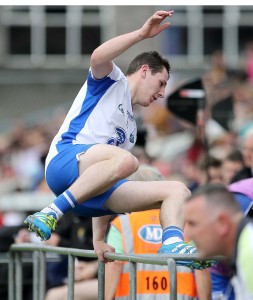 Shane Bennett takes the direct route into the bench after his substitution during Sunday's All-Ireland Quarter-Final win over Wexford.

Waterford climb back into saddle to advance to semi-final
Waterford will travel to Croke Park as firm underdogs when they take on Kilkenny in the All-Ireland Hurling semi-final at Croke Park on August 7th. Fact. Put an air to it and sing it.
Let’s face it, it’s been that way ever since the full-time whistle shrilled in the 1963 All-Ireland decider, when Waterford became one of only two teams to ever score six goals in the blue riband match yet still lose.
Funnily enough, the memory of that golden age was brought to mind at Semple Stadium prior to Sunday’s throw-in when Austin Flynn was accidentally named in Waterford’s starting team (instead of Austin Gleeson) to face Wexford! By the full-time whistle, with a 10-point win in the bag, thoughts turned to the challenge of facing those mighty Cats once more.
Croke Park beckons, and any Waterfordian suggesting the team shouldn’t bother travelling really should crawl back under that rock they emerged from and stay there.
“It was a very satisfying victory,” said a clearly relieved looking Derek McGrath in the wake of win which ought to have been even more comprehensive given that the Deisemen registered 17 wides.
“If there was a hint of a psychological scar from the beating that they received weeks ago, it certainly wasn’t evident and that’s a very pleasing part of the win.”
As for the wides? No biggie, in the manager’s view, echoing a refrain he’s previously aired on that topic.
“I’ve been consistent on that; I never really mind wides as such other than at half-time in the dressing room I pointed to the fact that we could have been in a better situation and if that takes over the mind, then it becomes a retrospective point…but it didn’t enter the mind, we kept tipping away; I think they got five points in a row and then we came with a rally of six points and I’m delighted, I’m particularly delighted for the lads who were very, very hurt over how they had performed in a 35-minute spell against Tipperary in Limerick.”
Having re-watched the Munster Final nightmare in the build-up to Sunday’s match, Derek McGrath noted his own body language at the Gaelic Grounds as the clock wore down, “disconsolate, looking extremely negative on the line and then coming out to face the cameras, and that made for even more harrowing viewing”.
The manner of that reversal clearly hit him hard, and I suspect, stung him personally (“it’s your own county, there’s a feeling involved in it”) but, as McGrath rightly pointed out, a little perspective on Suirside is required. “I don’t think we’ve been in successive All-Ireland semi-finals for five years; we need to stand back at times and have a more objective view. We’re there and we’re there on absolute merit, and we’ve massive challenge ahead of us against a Kilkenny team who’ve dominated the teams they met so far but we’re there and we’re really looking forward to the challenge of taking on Kilkenny.”
Taking on the game’s best at Croke Park is a dream for any Waterford youngster picking up a hurley, as Dan Shanahan rightly pointed out on Sunday last.
One win away from an All-Ireland Final, and however long the odds may be on a Deise win, the bottom line is that’s all it is. One win. Sure there’s no harm in dreaming big.