MINISTER John Halligan has hit back at claims a second cath lab at University Hospital Waterford (UHW) was “not justified”. He was responding to reports in The Sunday Times that health officials strongly advised Minister for Health Simon Harris against approving a second catheterisation lab for UHW. Earlier this month, Minister Simon Harris confirmed that a second permanent cath lab is to be provided on the grounds of UHW. However the Sunday Times report cites a series of internal health department emails, released under Freedom of Information, which suggest officials did not believe a second cath lab at UHW was justified or that it fits in with national plans
A further document notes that the proposal for a second cath lab is not consistent with the 2016 Herity Report, which concluded that a second cath lab in Waterford was not justified.
Minister Halligan has continuously refuted the findings and recommendations of the Herity Report on the basis that its population calculations were flawed; that the experience, concerns and service needs of consultants at South Tipperary and Wexford were not sought; and that the Herity Report did not address life-or-death clinical risk and safety concerns.He said the latest documents released under FOI further demonstrate the uphill battle that people in the south east have had to face to achieve equality in cardiac health care: “Since 2014, the HSE formally recognised the lack of a second cath lab at UHW as a critical clinical risk, rated at the most severe risk category in the HSE Risk Registry,” he said. 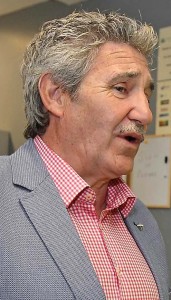 “This status was downgraded by an unknown person in the HSE, prior to Dr Herity commencing his review. The Herity Report itself was flawed on so many levels and yet officials are still determined to hide behind it in order to validate cardiology patients in the south east not receiving the same treatment as patients elsewhere in the country.”
A spokesperson for Health Equality for the South East (HEFSE) said the Sunday Times report raises serious questions about ‘Acute Hospitals Policy Unit 4’ in the Department of Health.
“They briefed Herity and continue to promote his development of a cardiac ‘travel time standard’ that does not exist in any other European system and is completely discredited as a service standard by the European Cardiac Society guidelines 2017,” the spokesperson said.
“It appears now they may also have blocked receipt to the Minister’s office of a HSE business case on modular cath lab for the South-East sent in January 2018 and they in recent weeks reference cardiac waiting lists at UHW as being ‘in line’ nationally when the truth is, the South-East has the longest and most dangerous delays being suffered by ‘non stemi’ cardiac in-patients in the country! Deliberate blocking and under reporting of cardiac procedures figures in review reports in the South-East has been a significant issue for the South-East service for many years – and as proven in FOI material uncovered earlier this year providing ‘selective references’ to steer review outcomes appears not to be a problem to some in this Department either! If people want to know Who? What? Where? Why? have patients been and continue to be put at risk in accessing timely cardiac care in the South-East this unit within the Dept of Health would appear to have most of the answers!”
HEFSE is calling for a public examination of the motives of this Unit and the information they are using to select and frame their policy recommendations and is calling for all South-East Oireachtas members to combine and demand satisfactory answers within the PAC or other Oireachtas committee to examine the ongoing activity of this policy unit.
“If this cannot be achieved satisfactorily within these fora then South-East Oireachtas members need to propose a vehicle that can!” the spokesperson said.
“We have for too long been treated as ‘pawns’ in a department led policy chess game and its high time these ‘players’ are brought into the light and their actions held to public scrutiny and account. Those who have suffered damage as a result of cardiac service delay and denial and their surviving family members in this region demand it.”
Meanwhile, the process to design and construct the new cath lab at UHW starts this month, with the recruitment of staff to take place during construction.
The new lab will be delivered within the next 12-16 months and the mobile lab currently delivering diagnostics at UHW will remain on site in the interim.
Separately, the National Review of Specialist Cardiac Services, which is investigating the provision of 24/7 cardiac care across the country, is due to be complete in June 2019.