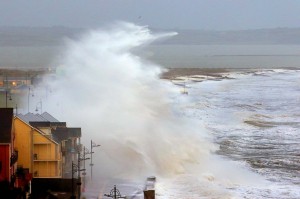 Storm Frank strikes county and region as communities are left counting cost
The worst floods witnessed for decades have left communities reeling along the banks of the south east’s primary river system (along with its tributaries) in the wake of Storm Frank, which struck the south east late last Tuesday.
While the unprecedented levels of rainfall had thankfully abated as we went to press, giving communities a chance to clean up and air flooded properties and businesses, the reality of the hammering communities have been subjected to is slowly dawning.
While Waterford city escaped the worst of the inundation, flooding on the Tramore Road and Ballindud occurred for the second time in a matter of weeks, leaving the route impassable on Wednesday and Thursday last.
Portlaw was the worst affected area in the east/mid-county, with floodwaters rising to levels “never before seen in our lifetimes,” according to local Councillor and general election candidate Mary Murphy (FF).
“Frances and David Power, who live in The Manse, just off the Bridge, are still out of their home, and the experience has taken a huge toll on both of them…it was like Armageddon.”
It’s believed that an assessment of the bridge at Portlaw will be required in the coming days given the deluge of flood water that cascaded beneath the structure over a testing period. Thankfully, any concerns about neighbouring Carrick-on-Suir’s historic Old Bridge abated in the wake of the best Storm Frank could throw at a structure built before Columbus set sail for the Americas.
But for residents living on the town’s North Quay, the worst flooding to hit the area in almost 20 years has inflicted massive damage upon several homes and businesses. 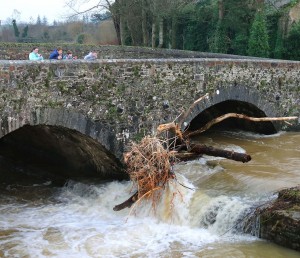 Abating floodwaters on the River Clodagh running through Portlaw