ARSON NOT RULED OUT IN CITY FIRE

Eoghan Dalton Reports
Residents of an estate in the city have described a “scary and eerie” atmosphere in the area, following a fire at a recently vacated house there last week. The semi-detached property in Connolly Place was seen on fire shortly before 8am last Thursday.
Residents had their attention drawn to the blaze after they heard a “loud bang”. Flames were spotted coming out a ground floor window as the fire quickly spread. The incident is still under investigation by Gardaí and it hasn’t been determined yet if the fire was a result of an arson attack. “It’s scary for families on the street and it doesn’t feel safe,” one told this newspaper 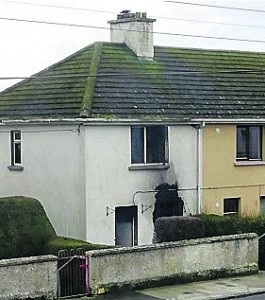 The scene at Connolly Place on Thursday morning last.

“It’s nothing for anybody to be waking up to, people were getting ready to bring their kids to the creche and getting ready for work when they saw what was happening. You couldn’t go out.”The house was unoccupied at the time of the fire but Cllr Jim Griffin (SF) said he found the incident “unusual”, as the Council had only taken the house back in charge the day before.
“It just goes to show again that we have to be so pro-active when it comes to vacant houses,” he added. Vacant properties in the city, Tramore and Dunmore East have all become the target for vandalism over the past 12 months, with fires being the result in several cases.
Cllr Griffin said that vacant houses have all too often become a target for drug dealing and other deeds, causing difficulty for other Council tenants in the area.He continued: “This was most unusual, that the fire started at 8am in the morning. The Council had only taken charge of the house the day before. There’s something at play in my mind there. “I would say to people, put your trust in us, we are going to keep looking for these houses to be occupied but I can understand clearly why residents in a normally quiet area of Waterford City would be very concerned about a fire at that hour of the morning when kids are getting ready for school and parents are going to work.”
Gardaí have appealed for witnesses in the area to contact Waterford Garda Station at 051-305300