Ballyduff Lower Go Back to Back

Ballyduff Lower are back to back Eastern Junior Football champions following a five-point victory over Erins Own at Dunhill on Saturday last. .
Ballyduff proved the better side throughout but had to withstand a stern examination from Erins Own before a late Jack Lyons goal finally extinguished the challenge from the Poleberry based side.
Calum Lyons had a point in the first minute for the eventual winners. Unfortunately this early score wasn’t an indication of things to come. The game was sadly scoreless for the next 19 minutes with both sides showing a worrying lack of ability to kick (or even handpass) the ball over the bar. Ballyduff were dominating play and possession but just couldn’t score. 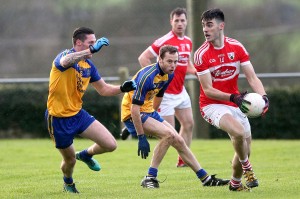 In the 10th minute, Erins Own goalkeeper Sam Robinson managed to find only Ballyduff’s Jack Lyons with a kick-out but the forward failed to hit target with a goal for the taking.
The wide tally for Ballyduff hit the half-dozen mark before Calum Lyons crashed a shot off the crossbar after 17 minutes with the ball cleared to safety.
Tommy Gough and Aaron Kennedy were showing well for Erins Own and Tommy Waring finally opened their account in the 20th minute with an excellent point from 35 metres.
Waring followed up this with two frees to put his side 0-3 to 0-1 ahead after 24 minutes. Adam Carroll then did well to save from Dean Kennedy as the blue and gold clad Erins Own warmed to the occasion.
Ballyduff crucially struck for a goal just before half-time. John O’Leary’s quick free found Emmet Power who transferred to Eoin Cummins and his deflected shot sped past Sam Robinson between the sticks leaving Ballyduff Lower leading 1-1 to 0-3 at the break. 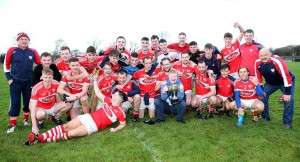 Ballyduff must have located their scoring boots at the break as they were far more accomplished over the second 30 minutes. The reigning divisional champions hit five points without reply from Emmet Power, Cormac Dunphy, Declan Cheasty, Calum Lyons and Eoin Cummins to look comfortable, leading by 1-6 to 0-3 at the end of the third quarter.
Matters looked even grimmer for Erins Own when Aaron Kennedy was dismissed for rough play after 47 minutes.
However Erins Own rallied and corner-forward Dean Kennedy soloed at the heart of the Ballyduff defence before soccering the ball to the back of the net in the 49th minute. Dean Kennedy pointed a free shortly after to narrow the margin to just two points.
Substitute Kieran Dunphy had a much needed point for Ballyduff after 54 minutes while the bustling Adam Byrne blasted the ball just over the crossbar a minute later to bring the margin back to two points again with just four minutes to play. Erins Own needed a goal and Adam Byrne almost provided it but his shot was blocked on the goal-line.
With time almost up, Ballyduff lifted the siege and John O’Leary found Jack Lyons unmarked to blast to the net and send his side back to another County Final.