Barrow Bridge Name is Back on the Agenda

A six-strong steering group, consisting of three appointees from both Wexford and Kilkenny County Councils, has been established to recommend ‘the most appropriate or worthiest names’ for the new 900-metre bridge crossing the River Barrow.
The name of the new bridge, which is the most prominent element of the €250 million New Ross Bypass Scheme, has already elicited considerable debate on both sides of the Barrow. News that the ultimate selection of the name will now be subject to a six-week public consultation phase consisting of four questions, followed by an adjudication by the steering group, will surely be welcomed in both counties. 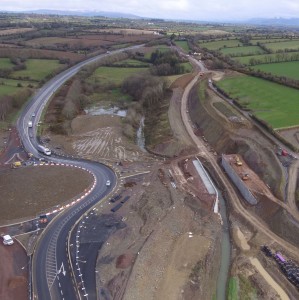 Works are ongoing at the Glenmore Roundabout, as the Ballyverneen Road Overbridge continues. | Photos: www.n25newross.ie

According to a draft document issued to Councillors at last Wednesday’s Piltown Municipal District meeting, “The Steering Group should meet within two to four weeks thereafter to adjudicate on the submissions and agree on the names to be forwarded to the Municipal District Committees”.
It’s anticipated that a joint meeting of Councillors from both bordering Municipal Districts will meet before the end of September to formally ratify a name for the new bridge, which will be Ireland’s longest upon opening.
At April’s Municipal District meeting, Kilkenny County Council Director of Services Sean McKeown said that, as the lead local authority on the Bypass, Wexford County Council is set to have the ultimate say on the naming of the new bridge. But this contention is not stated in the documentation made available on Wednesday last.
It’s also worth recalling that in 2016, New Ross Municipal District Councillors unanimously agreed that the bridge should be named in honour of Rose Kennedy Fitzgerald, mother of President John F Kennedy (the bridge makes landfall in Wexford a short distance from the Kennedy ancestral homestead in Dunganstown).
The four questions included in the draft submission form are:
1: Explain why you think this is a fitting name for this bridge?
2: What relevance or connection has this name to the area/location of the bridge?
3: In your opinion, what is the benefit to the area of this name?
4: In your opinion, what effect, if any, will this name have on tourism, employment or the socio-economic development of the area?
The draft states: “Given the scale and importance of the bridge, both from a major infrastructural development point of view, and its socio-economic potential for New Ross and the entire South East region, a relevant and fitting name should be conferred on the Bridge.” The provisional closing date for public submissions is 5pm on Friday, July 6th