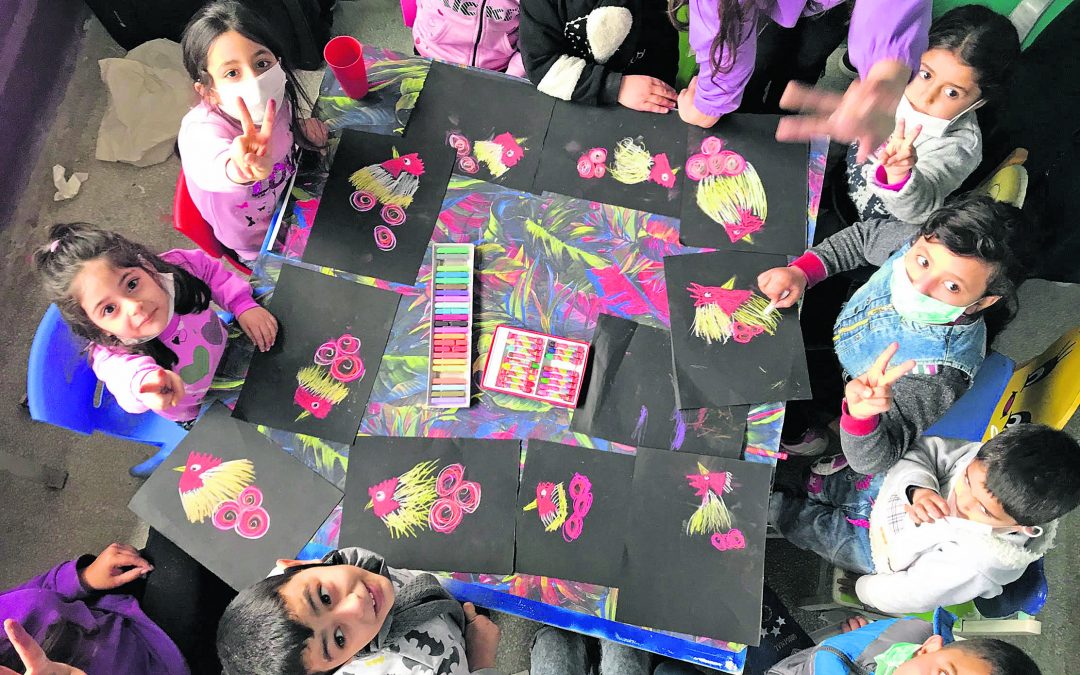 Waterford woman Anne O’Rorke set up TIAFI (Team International Assistance for Integration) in 2016, a non-profit Community Centre in Izmir, to respond and offer support to the vast number of Refugees fleeing war-torn Syria.

The centre offers a support desk, free lunches daily, exercise programmes for children with disabilities and educational and skill-development for women and children, many of whom have lost their husbands, fathers and brothers in the war.

A meeting between O’Rorke and Waterford artist Ben Hennessy before Christmas last year resulted in Hennessy’s successful application for an Arts Council funded residency in Izmir.

The Waterford artist has recently returned from this first stint in Izmir and explained to the Munster Express how the residency came about.

“I’ve had a love of paintings about the Syrian refugee crisis over the years and when the body of the little three-year-old boy Alan Kurdi was washed up in Bodrum in 2015 I was moved to do something about it. As a painter I always have a narrative, and I couldn’t get away from that story so I ended up calling my last solo exhibition in 2017 at GOMA (Gallery of Modern Art) ‘Boat’ with some of my paintings influenced by what was going in Syria. Fast forward to 2020 and with galleries closed and no exhibitions, the Imagine Festival did a series of films. I was interviewed for the films and spoke about the Syrian refugees and Alan and how some of my paintings were a response to that. Anne O’Rorke saw the interview on Facebook and got in touch with me to ask if was interesting in volunteering to go working with the children. I had known Anne for a long time and hugely admire what she is doing with TIAFI so we met up before Christmas last year to discuss everything”.

Although uncertain of travelling to Izmir in the middle of a global pandemic, Hennessy decided to take on the project and applied for residency funding.

“I didn’t know if it was a good idea or not, I didn’t really know the circumstances were or what might be ahead of me. I had been refused COVID payments for painting but was told by the Arts Council that there might be some development or residency funding available. The application for residency was successful and I found myself planning my trip to Izmir”.

The Waterford artist left for Izmir just before St Patrick’s Day last month and describes his experience working with TIAFI as incredible. 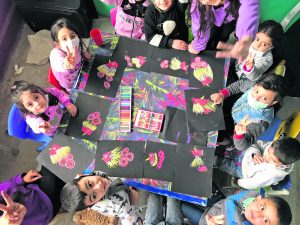 “From the very first hours I was there it was amazing, but it would also break your heart. It’s incredible what Anne is doing there. There are lots of volunteers doing fantastic work. I’ve no Arabic and none of the children have English but we were able to communicate through painting. One extraordinary day we had a little girl about four years of age with her own invented language, talking away to herself. I had a bunch of markers and she had never seen markers in her life. She was hysterical with laughter when she saw me using the markers. She thought it was one of the funniest things she had ever seen.   I did manage to engage with some of the women there who have so many tragic stories. It was such a sad place but for the first time there was a bit of laughter. I was just trying in some ways to bringing a bit of relief or joy to their lives and it has been an incredible success”. 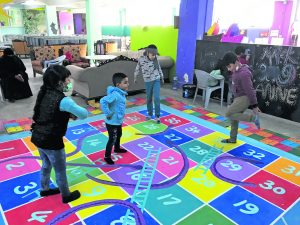 “We wanted to raise some funds to buy some supplies, so I started a GoFundMe page and the response in Waterford has been incredible. A special word of thanks to Aoife Hanrahan and her brilliant ‘Drop Crayons Not Bombs’ initiative and to all the amazing and generous artists who contributed works to the auction. I have to thank everyone also who bought artworks or made donations. I started with an ambition to raise €2,000 and now it has reached over €10,000. I keep raising the goal because there are so many worthwhile causes there and people or so generous.  I brought my own paints and over 300 brushes with me but the support we received enabled us to stock the studio with materials and furniture for the children’s use – easels, shelves, paints, paper, canvas, pastels, markers etc. The materials were sourced in Izmir and we have created a space that will be enjoyed by and benefit the children, their mothers and the artists that work with them in the years ahead. When we began to raise the money, we realised there was enough to employ a teacher for a day a week for a full year. That will have an incredible impact on the children.”

Hennessy intends to return to Izmir next month and hopes his residency will turn into an annual event. “We’re keeping it going. I’ve made wonderful connections and found some budding artists, including a young girl called Melek who will need someone to support her. The plan is to return mid-May but that depends on the situation with Covid-19 which is bad at the moment. I definitely will go annually and maybe more if I can afford it. People’s generosity is incredible and I’m very grateful for everyone’s support.”