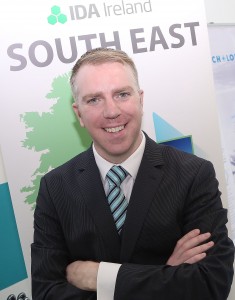 Waterford can look forward to some new emerging positive signs from the IDA, according to new IDA South East Manager, Brendan McDonald.
A new factory tailored for the pharmaceutical sector in Waterford is currently about to be presented to the architects and planners.
Site selection is underway with a second factory to be located in Butlerstown, close to the new OPKO Health building of approximately 25,000 square feet and will be suitable for the pharma, med tech and or engineering sectors. Plans are being submitted currently for this new build and could accommodate a workforce of 150 plus jobs.
Meanwhile, OPKA Health is committed to delivering 200 highly skilled jobs in total over the course of the next five years in their IDA-build premises, according to their plans .
The West Pharma building is near completion at Carrickphierish, where they are currently running a validation of line production which is proceeding as planned before full production is established, said Mr McDonald.
While he could not confirm if the Taoiseach will be in Waterford for the West opening, Mr McDonald confirmed Leo Varadkar will be invited, as he did when Bausch + Lomb recently opened their high performance unit, which will lead to 125 new jobs.
Efforts are also underway to attract financial service firms who may want to relocate extra activities from London in the wake of Brexit.
The opportunity the IDA hopes to exploit, Mr McDonald said, may lie in assuming back office activities for businesses which are already at maximum capacity in Dublin.
It should be kept in mind however that other large urban centres across Ireland will also be looking to attract such business, with Maritana Gate and other nearby buildings being considered.
New Grade A offices on the North Quays would be welcome also and the IDA have already confirmed that they would be happy to meet with the promoters Al Hokair, whom Mr McDonald expects to meet with them shortly. IT and financial services jobs are in the offing here but to secure them will require the availability of more substantial Grade A office buildings near Waterford city centre.
Mr McDonald said they were still not sure of the time scale here in terms of planning and development before they could promote it themselves also as an office location.
Another possibility in terms of office space is the Ferrybank Centre, which currently houses Kilkenny County Council offices and the local library is currently. That location is also of interest and a meeting has already been held with Kilkenny County Council in relation to the still largely empty shopping centre.
A decision on proposed changes to seven units at the Ferrybank Shopping Centre is due to be made by An Bord Pleanála on November 27th.
The applicant, Deerland Constriction Ltd, wishes to make a series of changes to the centre, including the “relocation, reconfiguration and enlargement of fire escape staircases, installation of additional lifts and fire escape corridors, reduction in size of permitted retail warehouse, gym, offices and retail units, part infill of mall voids, installation of travelators instead of escalators, re-arrangement of (the) food court to create restaurant units (and the) rearrangement of car parks resulting in a total number of car parking spaces of 1,079 spaces and the creation of two food kiosks on level one”.
Regarding external changes, the applicant wishes to re-arrange elements of the existing window, material and door layout of the building, adding that “overall, there is no change to the size, shape or character of the permitted Ferrybank District Centre”.
Deerland wish to change seven units in the centre to offices, which account for a total of 1,403 square metres (15,101 square feet). The sole appellants in this instance are Dunnes Stores.
Mr McDonald also believes there is a Brexit opportunity for the South East. The Dublin office market is expensive compared to Waterford.
The IDA nationally is working on this matter and the south east can benefit , where firms already have a Dublin facility and need additional space as the Dublin city centre office market may become over heated in terms of price.
Staff can be attracted to cheaper housing here and a more relaxed lifestyle with less congestion and a good work life balance. Salaries can buy more outside Dublin in terms of housing.
Two companies are expected to visit the south east soon and they will visit Waterford to see its potential.
On a negative note the Financial Regulator is based in Dublin and often firms want to be close to the regulator, but then we are just two hours away from the IFSC and new Central Bank in Docklands with the M9 and M11 with coming New Ross bypass.
Firms would typically look for 10,000 square feet (smaller firms: 5,000 square feet) so more of this level of office space would be required.
Some companies like a lot of space for leisure, landscaping and communal space so needs can vary.
IT is another option and Brendan mentioned Redhat as a possibility, of expansion or having similar operations.
Agora is another in Portlaw and Waterford, where an extra 75 posts have been added bringing the company to almost 120 jobs currently. Others on this sector include RedHat, Bluefin Payment Systems and Routematch.
Having TSSG and these firms helps in their pitching. Waterford IT and Carlow IT can supply the graduates for these firms and with just an hour between the two locations we are well positioned, in Mr McDonald’s view.
The Action Plan for jobs 2015/2019 is underway and the Government is now halfway towards achieving their target of getting 30 to 40 per cent extra IDA jobs into regional locations, so the picture at this juncture is reasonably positive