"BLOOD ON THEIR HANDS" 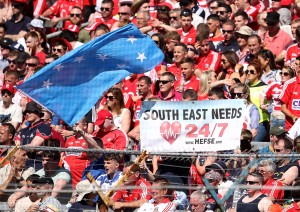 GRIEVING family members of a forty-year-old man who died while en route to Cork University Hospital (CUH) from University Hospital Waterford (UHW) on Sunday last have said the HSE have “blood on their hands”.
Farmer Thomas Power from Belle Lake, who recently turned 40, suffered serious chest pains on Sunday.
He made the short journey to UHW but was informed that the cath lab was closed for the weekend, as is the controversial current arrangement.
Mr Power was then prepared for transportation to CUH.
Initially, there were no significant concerns for his immediate well-being as the situation was deemed to be under control.
However, tragically, Thomas went into cardiac arrest while en route and died at Dungarvan.
His sister Catherine said she and her family are devastated.
She said a medic at CUH told her family that, had UHW’s cath lab been opened on Sunday, Thomas may still be alive.
“If he had not had to leave Waterford, he would be with us today,” she said.
She has described Thomas’ death as “criminal” and says the HSE have “blood on their hands”.
She also highlighted that it took three hours for her to get to Cork on Sunday.
“So how is an ambulance expected to make that journey?” she said.
“This can’t go on. The cath lab is sitting there in Waterford and not being used. Where do we go from here? What are our representatives in the Dáil going to do?”
Catherine Power has called for the current arrangement at UHW to change immediately in order to prevent other families going through the harrowing ordeal currently being experienced by her family.
Son of Eileen and Michael, Thomas married his wife Bernie (who is expecting the couple’s first child) just nine months ago.
In a statement, UHW confirmed that a male patient who was in transit on Sunday 18th June to CUH, following an initial assessment at its Emergency Department, was pronounced dead on arrival at CUH.
“University Hospital Waterford extends its deepest sympathies to the family of the deceased,” the statement said.
The tragic event occurred as UHW campaigner Kieran Hartley released documentation to The Munster Express which he obtained through a Freedom of Information request which shows new Taoiseach Leo Varadkar’s apparent disregard for the issue when concerns were highlighted to him as Minister for Health by a UHW consultant in 2014.
Mr Hartley, who lodged a Garda complaint last September over the controversial change to the ’risk register’ has reiterated his call for the HSE to be held responsible under ‘corporate manslaughter’ for any deaths which occur as a direct result of crucial 24/7 cardiac care services not being available at UHW.
Repeated warnings have been issued by campaigners, including Mr Hartley, that people in the South-East will die if the service is not available at weekends and have warned that people will not get to Cork on time.
Matt Shanahan of the Health Equality for the South-East group has said another patient was transferred to Cork on Saturday morning after arriving at UHW.
“We have this issue every weekend,” said Mr Shanahan.
“Last year, over 75 patients who attended with a heart attack had to be removed from Waterford as the cath lab was not open at weekends.”
He said the issue has now, unfortunately, been once again placed under the national spotlight as a result of Thomas Power’s tragic death.
Catherine Power took to RTÉ Radio One’s ‘Liveline’ show yesterday (Monday) in an emotional interview with Joe Duffy in which she highlighted the issue.
Another caller, Gerard Cunningham, said he was “lucky” to be alive after being transferred from Waterford to Cork after suffering a heart attack earlier this year.
After arriving in Cork, following a journey of one hour and 20 minutes, he had two stents fitted.
Three weeks later he had three more stents fitted.
Callers to the show also highlighted numerous issues, including the lengthy delays being experienced on the N25 en route to Cork at Killeagh.
One caller also pointed out that after road works have finished in Killeagh, there are plans for further road works in Castlemartyr.
Since first highlighting the story of Jennifer Pheasey from Waterford City in April 2014, The Munster Express has featured stories of numerous local people who have also been shocked to discover the limited operating hours of crucial cardiac services at UHW, including Jimmy Fitzgerald (Ferrybank), Kieran O’Keeffe (Butlerstown), John Tobin (Tramore) and Tom O’Dwyer (South Kilkenny).
All expressed shock at discovering the current situation in relation to cardiac services at UHW and called on politicians and hospital management to take action to rectify the issue.