A new fundraising campaign to help Waterford Hospice reach its €6 million fundraising target for the two floor Palliative Care Unit at University Hospital Waterford (UHW) was aptly launched by Deise hurling star, Michael ‘Brick’ Walsh.
With €4.5m already raised for the new 20-patient unit, Hospice Chairperson Danette Connolly praised the people of Waterford and South Kilkenny who dug so to deep during the austerity era to support this long-awaited facility. 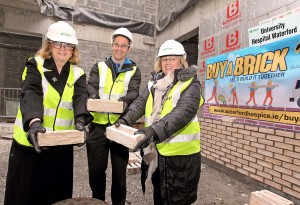 Waterford and Stradbally GAA's Michael 'Brick' Walsh, pictured at the 'Buy A Brick - Let's Build It Together' for Waterford Hospice at the site of the new UHW Palliative Care Unit with Danette Connolly (Waterford Hospice Chairperson) and Marie Dennehy (Board member, Waterford Hospice). | Photo: Noel Browne

“The people of Waterford and the surrounding areas have been absolutely amazing, and to see the Palliative Care Unit finally literally getting off the ground at UHW in what’s the 30th anniversary of Waterford Hospice, is obviously a great sight to see,” said Ms Connolly.
“Over the past 30 years, Waterford Hospice has cared for a great many people in their homes and we’ve had so much sustained support for our long-term campaign for the in-patient palliative care unit in Waterford, as illustrated by the incredible total that’s already been raised both for the unit, along with the funds we need to pay the nurses who provide home care on a daily basis.”
The ‘Buy A Brick’ campaign is the latest initiative which Ms Connolly hopes will propel Waterford Hospice towards the €6m mark.
“When it’s possible and a person wants it, being cared for in your own home is probably one of the most ideal environments for providing palliative care. It gives the person privacy and dignity,” she added.
“For the family too, they can spend quality time with a loved one who may be in their last days and hours more so than what’s possible in a hospital setting. Realistically, this isn’t always possible so when somebody does need to be in hospital, the Palliative Care Unit will enable people to be with their loved one during this really hard time, but in a much better environment. There will be 20 single rooms in the unit, slightly bigger than a regular hospital room, there’ll be room for family to be their with the patient. The unit will open out onto a garden area, and there’ll also be areas where people can have a cup of tea if and when someone needs a time out so there’s a great deal of progress being made on the building itself now, as anyone passing the hospital will have noticed over the last few months.”

An artist's impression of how the new Primary Care Unit at UHW, the Dunmore Wing, will look upon completion.

Speaking to The Munster Express (February 6th), UHW General Manager Richard Dooley said that the new €30 million unit, which will be titled the Dunmore Wing, acknowledged the “huge contribution” Waterford Hospice has made in helping to deliver the unit.
“It’s enormously gratifying for the hospital staff, the people of Waterford and moreso for palliative care patients who need such an in-patient facility and that 20-bed unit, which will occupy the bottom floor of the new five-storey unit, will operate on a regional basis,” he stated.
The services to be provided on the three floors above the Palliative Care Unit, which will each feature 24 single rooms (a total of 72 new beds) will be determined by the hospital’s Executive Management Board within the next month. The unit will also provide day services and a new base for Hospice’s Home Care team.
“From a humanitarian point of view, patients who are approaching end of life; in lots of cases, they need single room accommodation,” he stated.