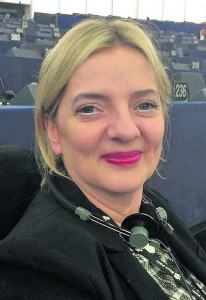 A Sinn Féin MEP has reiterated her call for the support of increased fish processing in Dunmore East.
Ireland South MEP Liadh Ní Riada has called for greater supports for the fishing industry in Ireland as a matter of urgency.
Just five per cent of fish caught in Irish waters is processed in the country – a figure Ms Ní Riada described as “startling and alarming” when speaking with The Munster Express in Strasbourg recently.
“I have raised this again and again and I seem to be beating the same old drum,” she said.
“We only process five per cent of all the fish that are caught in Irish waters. Instead, it’s processed on factory ships or sent to another country to be processed and then brought back to Ireland again. But yet we have plants, such as in Dunmore East and other parts of the country, lying idle.”
She continued: “Does anybody else see the problem with this? To me, it’s a no-brainer. Let’s invest in processing so that we can give our fishermen some kind of dignity and a livelihood.”
Additionally, Ms Ní Riada has called for the provision of a Single Boat Payment for small scale fisheries.
She recently met with European Commissioner for Fisheries Karmenu Vella who assured her that such a scheme would be strongly considered by the European Commission.
“We have it for farmers, why can’t we have it for fishermen? On stormy days when they can’t go out fishing, they don’t get social welfare. They get nothing,” she said.
“Fishermen regularly risk their lives in rough seas to provide for their families so a subsidised payment similar to that given to farmers would give the fishermen sufficient resources to see them through hard times such as when there are dangerous weather conditions at sea preventing their vessels from leaving port, not to mention to work safely.”
She believes the political will to fight for the fishing industry is lacking – especially at a national level.
“Somebody has to stand up for this industry,” she said.
“You can come up with solutions that, to me, are very straightforward but they fall on deaf ears. But we have to keep on banging the drum. I think fishing will always be the ‘poor relation’ as long as we have a government that’s intent on keeping a divide and looking after the big farmers and the big fleets instead. I’m not against the big fleets as they provide employment and they need to be looked after as well. But there needs to be equal distribution. A Single Boat Payment would mean the difference between many fishermen surviving in the industry or not.”