A local campaigner has declared her intention to contest the next general election as part of the pursuit of 24/7 cardiac care at University Hospital Waterford (UHW). Bernadette Phillips is being backed and endorsed by the ‘24/7 Cardiac Cover for the South-East’ campaign group, which was established by campaigner Willie Doyle in 2014 and succeeded in bringing the issue of cardiac services at UHW to national attention. 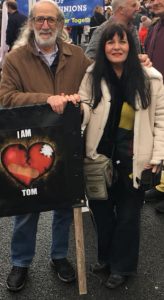 Stan and Bernadette Phillips pictured at the march in support of 24/7 cardiac care in Waterford in January.

He says Bernadette has supported the campaign from the beginning and described her as a “strong candidate who will fight for the people of Waterford”.Bernadette Phillips says she wants to fight the “injustice and inequality” which has been shown to Waterford and the South-East.“24/7 for the South-East is an essential service and it is non-negotiable. Why are we being denied this basic service? We shouldn’t be grateful for the crumbs that come from the table,” she says.
As the partner of someone with a cardiac issue, Bernadette says the issue is deeply personal.
“When it goes past 5pm each day we worry; every weekend and Bank Holiday we worry; when the cath lab is closed for maintenance we worry. I have spoken with people who have had to make that trip to Cork in an ambulance. I know the reality of what’s going on and I know the frustrations of GPs and consultants.”
She continued: “We cannot continue to impose such worry and stress on people’s lives. I have worked with people on the ground and now I need to take this to another level. I will be the person who is on this issue 24/7. I will be challenging, questioning and I will be there doing the very best I can to ensure this is kept in the spotlight.”
A sociologist and researcher, Bernadette has a sizeable online following through her ‘Moments in Time with Bernadette’ Facebook page which aims to showcase and promote all aspects of Waterford life.
As part of her election campaign, she has adopted the tagline ‘Bernadette Phillips – Getting to the HEART of the Matter for Waterford’ – however she says she is not a single-issue candidate.Bernadette says she wants to fight for other health services as well as all issues pertaining to Waterford.
“I want to progress Waterford and I have all of Waterford’s interests at heart,” she says.
She is now actively campaigning ahead of a date being set for the next general election.
“There isn’t any time to waste,” she says. “We never change anything by doing the same thing. We can’t be afraid to challenge what has been done before.” in particular, Bernadette says she would like to bring the business community together to fight for the issue of cardiac care and to highlight the tourism and economic implications of the lack of services at UHW.
“We all have a heart and we have no idea when and where we may need this particular service,” she says.
“I am 100 per cent passionate about this and I am doing this to make a difference. This is not about making promises. A lot of promises have been made and broken. When somebody has a heart issue it’s not a waiting game. People need immediate help.”Bernadette says she looks forward to engaging with other people and groups. “I have great respect for all who have campaigned on this issue and the type of work that has been taking place,” she said.
Bernadette currently serves on the executive of Waterford Older People’s Council and has been involved with Tramore Community Radio (TCR) and Community Radio Youghal (CRY) for many years.
In 1997, she founded the Waterford Student Mother’s Group which was a pioneering project aimed at supporting teenage mothers to remain in mainstream education.
She has taught personal development classes in schools and has worked with University College Cork (UCC) in teaching disability studies and social science.