Cardiac case made in Capital 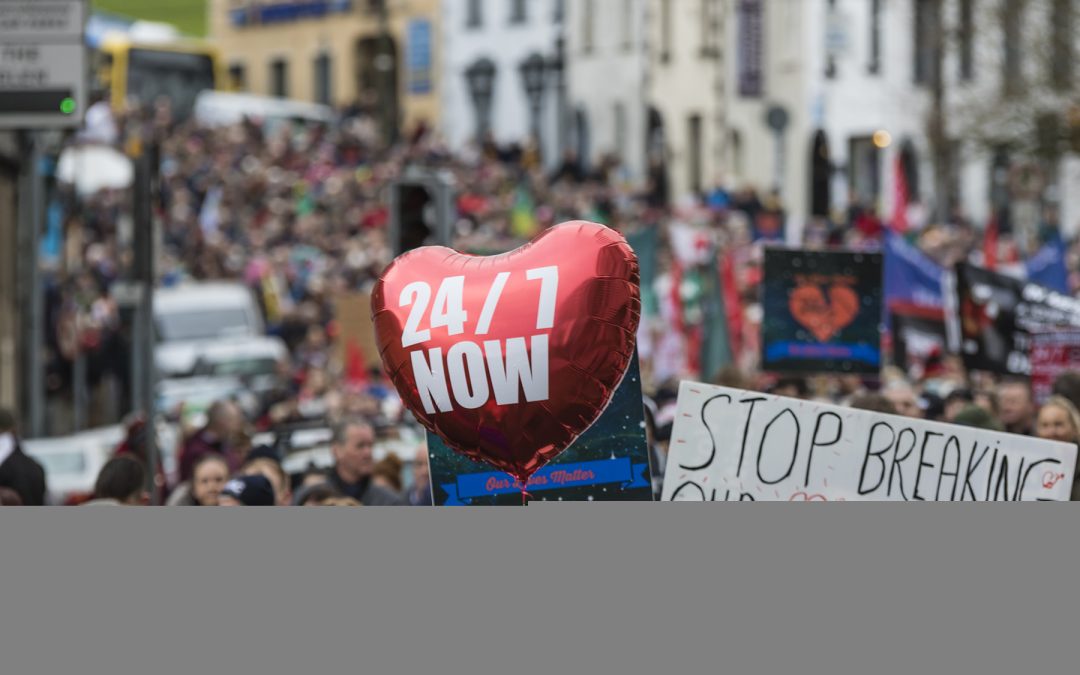 Eoghan Dalton Reports
The demands of the 24/7 cardiac campaign were brought to the capital last Saturday as hundreds of people from Waterford marched in Dublin.Protesters carried placards saying that cardiac death is “a southeast reality” and another said: “Fine Gael. Fine Mess.” While there was a level of disappointment with the numbers, organisers were hoping to once again convey the message to a Dublin audience. This worked to a certain extent, with a number of passers-by telling media that they appreciated and supporter the aims of the campaign.
The protest centred around the lack of interventional care at UHW, where a permanent catheterisation lab operates from 9am to 5pm Monday to Friday. A temporary cath lab at the hospital offers a diagnostic service but cannot treat patients.

Demonstrators gathered at the Garden of Remembrance and marched to Kildare Street to protest outside the Dáil. “There’s the symbolism behind it. We’re outside an empty Dáil because the Dáil is empty on Saturdays and so is the cath lab in the southeast,” said Independent Councillor Matt Shanahan, who is chairman of campaign group Healthcare Equality for the South East. He added that it is “wrong” that UHW is the only designated national cardiac centre which does not receive funding for a 24/7 service.
GAA figures including John Mullane and Brian Cody lent support to the campaign ahead of last weekend’s march. January last saw 10,000 people turn out to protest in Waterford city about the lack of a 24/7 service.
Paul O’Toole said he travelled to Dublin from Waterford city to help press the case: “There’s no service there at weekends. I mean, who wants to die on the way down to Cork?”
One woman, Ruth, originally from Grange Park in the city, said she joined the march from her Dublin home. “It’s not something I don’t it’s just something I hope is sorted before anyone else has a personal reason to come out.”Tony Wallace, who led the march with his pipes, said he came out after a family member made it to UHW just in time before the cath lab closed. While Tony is a member of the New Ross District band he actually lives on the Dunmore Road.
“One of the reason I chose to live where I’m living is because I’d be near the hospital, but now it turns out that I have to be living near Cork. There’s a lot of people here who will suffer the consequences or have suffered the consequences due to this situation.”
While the Minister for Health has approved a second cath lab for UHW, campaigners continue to hold out for a full cardiology service.
The existing lab’s current operating hours are set to be expanded to an 8am to 8pm weekday service.A national review of cardiology services is due to be published later this year.
“The country is still waiting for this government to give us an effective health service,” said Tom Creedon, secretary with the Waterford Council of Trade Unions. “We’re here on a march because for 75 per cent of the time the cath lab is closed.”He said the campaign brought some “gimmicks” to Dublin to drive interest, including protesters taking to the ground on O’Connell Street in front of passers-by. They also carried out a CPR demonstration across from the Dáil and brought along a carriage drawn by horses from the Winterval Christmas festival. Tim and Bruno, horses belonging to Four Shires Carriage Company, are best known for their services during Winterval but they were also roped in for the day. They drew a carriage which held statistics on cardiac healthcare in the region.
One of these was on a placard in the window of the carriage reminded protesters of figures from a Prime Time Investigates programme, which showed that 98 per cent of patients who need to be transferred to cardiac centres outside the region failed to make it within 90 minutes, considered the ideal time to perform a life-saving procedure on a patient.
Jenny Pheasy, who five years ago narrowly made it to the cath lab on a Friday evening before 5pm after suffering a heart attack, said, “Simon Harris is putting the lives of people in danger”.”We in the South East are not second class citizens and do not deserve a second class service,” she told the crowd.
The next march is planned for May 18th, less than a week before the Local Elections where the issue may be felt at the ballot box.