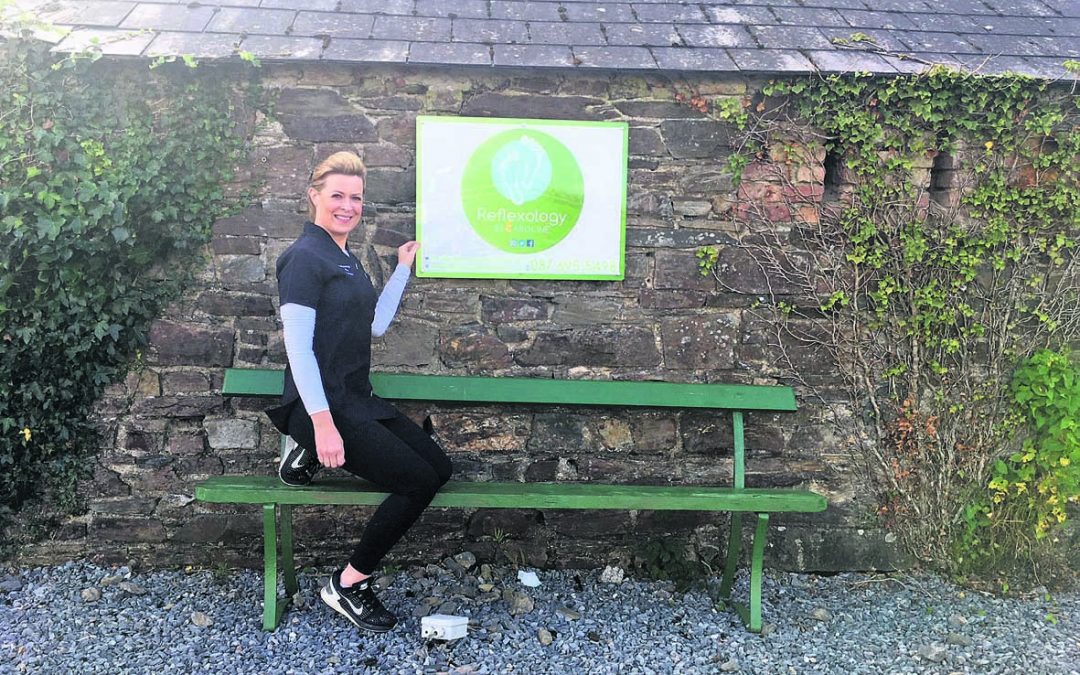 Where on the Waterford Greenway can you step into a warm and welcoming oasis to   enjoy a heavenly experience which allows you to forget all your woes?
‘ Reflexology by Caroline’ situated midway on the Waterford Greenway at The Courtyard,   The Workhouse, Kilmacthomas, is run by the vivacious Caroline O’Byrne who is originally from Waterford City.
Caroline (who is twin sister of Fine Gael Councillor Frank Quinlan) is passionate about   the many holistic benefits of reflexology.
“Reflexology opens the energy pathways and allows the free flow of energy through the   body which has a profound, almost magical healing effect. It relaxes and balances the   entire body,” she says.
Caroline specialises in working on feet which, for centuries, have been regarded as a gateway to healing the body.
“The philosophy behind reflexology, as in many complementary therapies, is that illness is a result of blockages or restrictions in the flow of essential energy,” she explains.
“These blockages can be caused by stress, upset, lifestyle and injury, causing a state of imbalance which can manifest as disorders, discomfort or disease. By stimulating the reflexes on the feet, reflexology helps the body to release these blockages, thus improving overall well-being.”
She explains that reflexology is recognised as having benefits for Anxiety and Stress; Sleep and Relaxation; Energy and Metabolism; Headaches and Sinuses; Hormonal Imbalance; Fertility and Pregnancy; and Stomach and Digestive Problems.
Warm and welcoming
An hour’s session with Caroline allows people to completely switch off and relax – something which is hugely important in these troubling times.
“The human touch is very important,” says Caroline. “To hold someone’s feet can benefit them hugely. In these current times, everybody is a bit more anxious and many are seeking a calming effect on the body.”
Exuding a warm and welcoming nature, Caroline will ensure that her clients are made feel as comfortable as possible. Once they are ensconced with a pillow and a blanket, they can descend into a calm, deep, meditative state.
Relaxing, melodic, and peaceful background music further augments the ambience as Caroline gets to work.  She provides treatments to men and women of all ages as well as children.
Her current role is certainly very different to her position as a senior cabin crew member with British airline Virgin Atlantic. Her work brought her to numerous exotic locations worldwide, including Shanghai, Hong Kong, Delhi, Mumbai and her personal favourite, Cape Town.
From flying over Table Mountain to working at the foothills of the Comeragh Mountains, what brought this glamorous jet-setting globetrotter to picturesque Kilmacthomas?
Road to Reflexology
After 15 years of adventure with Virgin Atlantic, Caroline embarked on a new role at Harvey Nichols in Dublin where she managed the Elemis counter. As part of this role, she also operated a treatment room where she provided facials.
Branching into reflexology was never far from her mind, largely because of her own personal experiences of being on her feet for lengthy periods during long-haul flights.
“Every time I landed, I felt I needed a foot rub. I would always try to find a reflexologist,” she explained.
After observing many different practitioners worldwide, including a blind man in Shanghai, Caroline’s interest in the field was further heightened.
She embarked on pursuing qualifications, firstly attaining a Diploma in Reflexology under the guidance of teacher Regina Curley. She has amassed numerous additional qualifications, including in Advanced Facial Reflexology, Women’s Health, Reflexology for Preconception and Fertility, and Reflexology for Babies and Children. Caroline is also a member of the Irish Reflexologists’ Institute.
Life took an unexpected turn after meeting Kilmacthomas native Timmy O’Byrne at the Tramore Races. Prior to this encounter, she says her knowledge of the Mid-County Waterford village extended to passing by when travelling to Cork for some Christmas shopping!
The allure of a Kilmac man, and a romantic proposal in Crough Wood, proved too strong to resist and the couple married in January 2016. The birth of their son followed soon after and Caroline now proudly calls Kilmac her new home.
Business beginnings
Keen to bring her reflexology services to the area, Caroline rented a room from well-known physiotherapist Peter Kirwan at his base in Kill and at his Health, Fitness and Wellbeing Studios in Fiddown which opened in 2017.
She decided to branch out on her own and, having completed the VTOS Start Your Own Business course at the Kilmacthomas Further Education and Training Centre at The Workhouse, decided to make her dream a reality by obtaining a unit in the adjoining courtyard.
Caroline has now created a beautiful treatment room which is adorned with attractive décor.
“I wanted to make the room as comfortable and as cosy as possible to create a calming effect,” she explains.
The essence of Caroline’s business, coupled with her bubbly and positive personality, further augments the feel-good atmosphere which has been created in Kilmacthomas in recent times.
In stark contrast to its dark history, an enterprising hub has now been created at The Workhouse. The area is brimming with vitality which has been fuelled by the activity generated by the Waterford Greenway.
“There has been unbelievable growth in Kilmac and everybody works together,” says Caroline.
On opening amid a pandemic, she admits she “took a chance” but says “everything has fallen into place”.
“I want to make people feel good and I get great job satisfaction from helping people,” she adds.
It is certainly clear that Caroline is hugely passionate about her work and genuinely wants to make a difference to her clients’ health and well-being. Kilmacthomas is certainly fortunate to have gained the skills of this enterprising lady who looks certain to enjoy future success.
To book an appointment, or for further information on the services provided, visit www.reflexologybycaroline.ie; call 087-6955498; or email info@reflexologybycaroline.ie