Eoghan Dalton Reports
Dozens of community employment (CE) scheme workers protested yesterday (Monday) in the city.
Striking workers called for the implementation of a court recommendation that allows staff access to occupational pensions.
Fórsa and Siptu trade unions staged the rally at the INTREO Centre on the Cork Road in the early afternoon.
Garrett Wyse, supervisor of the Tramore Community Employment Group Community Employment scheme has been working as a CE supervisor for over five years. “The pension issue has stalled since the Labour Court recommendation in 2008, and the lack of action to implement the recommendation is beyond frustrating,” he said. 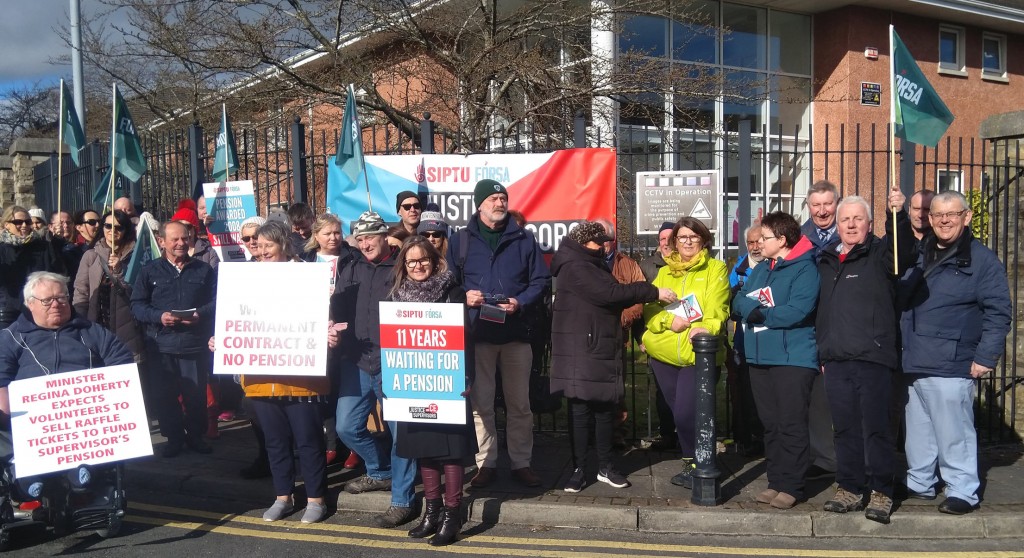 “We are approaching the 11th anniversary of that recommendation. As a group of workers we are frustrated and angry that this has been allowed to idle for so long. The current government is the third administration that has essentially ignored it.”
Mr Wyse added: “We’re taking action today because it is our last resort. We withdraw our labour with some reluctance, but we really have been left with no choice. Our appeals to the successive administrations have fallen on deaf ears. This is the only option we have left,” he added.In a statement, Siptu official Eddie Mullins added: ”More than 250 supervisors have retired with no occupational pension since the 2008 Labour Court recommendation was published. Between 30 and 40 are currently retiring each year.”
Fergus Kerney, CE supervisor with the Waterford branch of the Irish Wheelchair Association, said that the Labour Court, “the referee, had come down on our side…The Dáil has come down on our side after a motion lead by Fianna Fáil and Sinn Féin supported us”.
Fórsa official Brendan O’Hanlon explained: “The industrial action follows a 10-year dispute over pensions. The 1,250 staff concerned have no access to any occupational pension scheme, despite a 2008 Labour Court recommendation.”Numerous local politicians turned out to show solidarity, including TDs David Cullinane (SF) and Mary Butler (FF) as well as Una Dunphy (PBP), who was part of a delegation from the Waterford Council of Trade Unions. In a recent letter to the Minister for Public Expenditure and Reform, Paschal Donohoe, Fórsa official Angela Kirk explained that both unions had worked tirelessly with the minister’s department and had campaigned to secure the implementation of a 2008 Labour Court recommendation.
Ms Kirk said frustration with the process prompted the decision to take industrial action. “The decision to take industrial action has not been an easy one. However, 1,250 CE supervisors and assistant supervisors who manage local projects on a day-to-day basis, and lead the delivery of services by participants, believe it is the only course of action left to them to achieve justice for workers who have waited patiently for over 10 years to have the terms of their Labour Court recommendation implemented,” he said.
In a statement issued last Friday, Congress General Secretary Patricia King said: “that it is an outrage that these workers do not have access to an employer sponsored occupational pension scheme. The existence of such a scheme is one of the things that marks out decent employers from those who wish to exploit ordinary working people.
“The fact that workers in these State sponsored schemes are denied this basic entitlement is not acceptable. In many cases these workers are involved in the provisions of essential services that are relied upon by some of the most vulnerable communities in our society,” she said.David Cullinane, who is also Sinn Féin’s spokesperson for workers’ rights, called on the Minister for Social Protection Regina Doherty to accede to the Labour Court and award CE supervisors their full pension rights.
“I have met many CE supervisors and assistant supervisors in Waterford on a number of occasions over the years. I also met a national group of supervisors that has been campaigning for justice in this area for years.” He stated: “The supervisors and assistant supervisors have a clear pay link with managers, instructors and administrative staff in community training workshops and they are seeking a defined pension scheme similar to that which applies to these grades. What happened to them was a double injustice