Eoghan Dalton Reports
“It became obvious that we needed to get here quickly, because if we don’t someone else will.” That was Anthony Tepedino’s explanation for why he is bringing 100 jobs to Waterford city as part of his company Allstate Sales Group Inc (ASG). The telecommunications outfit, which was founded in New Jersey in 2008, is a provider of turnkey engineering and construction services to the telecommunications industry and last week announced it is to establish software development and CAD support centres locally, with the jobs to be made available over three years.
[caption id=”attachment_99466″ align=”aligncenter” width=”4361″ caption=”ASG President and CEO Antony Tepedino flanked in Waterford last week by Minister of State John Halligan and IDA Ireland Chief Executive Martin Shanahan. 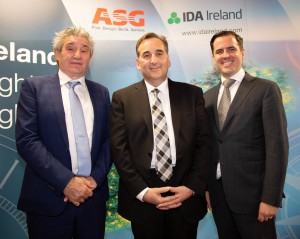 ASG President and CEO Antony Tepedino told attendees at the official announcement last Tuesday at the IDA Business Park (Cork Road) that the company had embarked on a journey about six months ago to find a location for its first operations outside the US.
“We started looking at all these different places and we really didn’t know what to do, but as we started seeing the city, as we started seeing the area, meeting the people, it became obvious that we needed to get here quickly, because if we don’t someone else will.
He said he that the community locally, through Waterford Institute of Technology, would support advances in telecommunications software. “We are pumped,” the Brooklyn native added. It also announced another 100 jobs for a separate temporary base in Sligo.
ASG will establish at WorkLab Waterford during the initial start-up phase. The company, which was supported by the IDA in coming to Waterford, is investigating permanent office options in both in the city as well as in Sligo.
Its centres in both locations will employ similar technical and professional workers, including software developers, CAD GIS technicians, management, finance and HR staff.
Headquartered in New Jersey, US, ASG was founded in 2008 and has operations in eight US locations, including offices in New York, Pittsburgh, Boston, Tampa and Atlanta, employing some 700 people. “We are excited to have the opportunity to develop, work, and grow our international capabilities in Ireland. Our industry, telecommunications, has never been so vibrant; there is no better place to launch our European expansion than Ireland. Ireland provides a wonderful platform to achieve our goals. Its diverse community, business climate, and people will allow ASG to develop and grow,” said Mr Tepedino.
Services provided include planning, designing, mapping and building the pathways that telecom service providers require to connect new voice and data customers.Minister of State for Training and Skills John Halligan (Ind) took part in the official launch last Tuesday at WorkLab, stating: “This is great news for Waterford and the South East and is a hugely positive indictment of the region as being to the fore when it comes to attracting global investment in the technology and engineering sector.
“Indeed, the guaranteed supply of highly skilled engineering graduates from Waterford Institute of Technology was a key factor in ASG’s decision to locate to Waterford, in what is the company’s first expansion outside of the US.”I have absolutely no doubt that having an institute of the calibre of WIT so close by will be of enormous benefit and will help to strengthen development at ASG going forward.” Welcoming the news, Minster for Business, Enterprise & Innovation, Heather Humphreys (FG) said, “I am delighted to see ASG choose Ireland as their first location outside of the US. This investment is a great vote of confidence in Ireland’s regions, and builds on our commitment under the new Regional Enterprise Plans to provide the conditions for quality jobs in regional locations.”