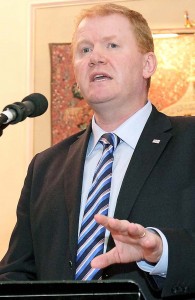 Eoghan Dalton Reports
Fine Gael Senator Paudie Coffey has confirmed he is pursuing a retrial in his case against the publisher of the Kilkenny People, concerning an allegation that the newspaper defamed him. A jury failed to reach a verdict in the case last December, which arose following a January 2016 article carrying the headline ‘Coffey the Robber’.
According to Senator Coffey, the case is being relisted this month with a sitting expected later this year.

Speaking to The Munster Express last Friday evening, he said he intended to pursue the case: “I had a good name before I entered politics and I hope I’ll have a good name before I leave politics.” The article’s heading made reference to Crotty the Robber, the 18th Century highwayman who hid in the Comeragh Mountains. The piece itself was about the proposed change to the Waterford-South Kilkenny boundary and heavily quoted a press release from Mr Coffey’s Fine Gael colleague, Ferrybank-based Minister of State John Paul Phelan.
Senator Coffey contested that the article had been a major factor in him losing his Dáil seat at the last General Election, held weeks after the Kilkenny People article was published.
He subsequently sued the paper’s publisher Iconic Newspapers, alleging in the High Court that he had been defamed. The jury however failed to reach a verdict after almost 11 hours of deliberation. It’s understood the legal costs incurred by each party has reached six figures, with a retrial certain to see those amounts rise further.