Comeragh Path Project has "not been abandoned"

A Comeragh Mountain walkway proposed to link Crough Woods to the Mahon Falls has not been abandoned, according to Waterford City & County Council.
The Council stated its intention in response to a series of questions put to it by RTE’s Damien Tiernan following An Bord Pleanála’s January 29th that the project was not exempted development, i.e. that any further works in relation to the path would require planning permission.
The Board made this decision in the wake of a referral put to it by Declan McGrath of King’s Channel, Waterford, an author of several books about the Comeragh Mountains, in which he requested that “the construction of the road is development, and is not exempted development”.
The report of Inspector Philip Davis notes: “The referrer outlines in great detail his understanding of the background to the works on the site – in short, he understands that the works were carried out on the basis of a verbal approval from the planning authority that planning permission was not required, and funding was provided by the Council.” 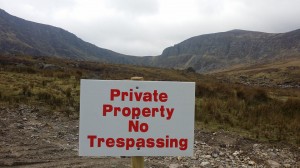 Controversial signage erected in March 2016 falsely claimed that the route to the Mahon Falls had been closed off after a local landowner reported concerns over the safety of his sheep. The Comeragh Community Development Group said a landowner had erected signage due to a small number of visitors allowed their dogs to roam freely.

Mr McGrath also contended that the works which the Comeragh Community Development Group (CCDG) wished to carry out did “not constitute a ‘greenway’, but is laid out as a full road”.
In its own reply, the CCDG stated that “the current situation is not a real reflection of what the final walk will look like once it is completed and landscaped – it is intended to blend into the landscape as with the present walk through Crough Woods.” The Group added: “It is denied that it is a ‘roadway’ or ‘road’ under the meaning set out in the Regulations. It is described as a ‘wood walk’.”
In his assessment, Mr Davis said there “are no detailed plans presented of the final works, and the works were not yet completed, so it is difficult to judge the precise nature and motivation for the final intended structures on site.”
He also states, unequivocally: “I would note in this regard that I have no reason to question the goodwill of the organisation behind the works, which is not the landowner, and neither do I question the motivation of the referrer. The situation on the ground appears to have resulted from a complex series of misunderstandings between the Council and other bodies which is beyond the scope of this report to address.”
He adds: “It was presumably intended to remove much of the spoil visible on the site and regrade some of the embankments, in addition to providing proper paving. There are no indications on file as to any type or finish or whether the drains are intended to be covered, but I assume it would be a crushed limestone topping similar to that of the walkway nearer within Crough Woods…I note the occupier disputes the term ‘road’, and states that it is a ‘walkway’. Without prejudice to my conclusions I will use the term ‘road’ as this is the term used generally for such structures within the Act and Regulations. I do acknowledge that the likely final form and use of the structure is as a leisure walk.” 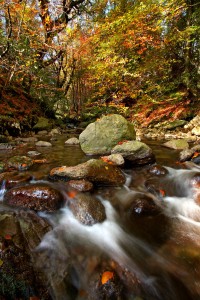 On February 20th, in response to Damien Tiernan’s query, Waterford City & County Council Communications Officer Claire Hartley stated: “Waterford City and County Council approved grant funding to the Comeragh Community Development Group for an extension to the Crough Wood Walk and the purchase of land to facilitate further connection of same to the Mahon Falls. The Group undertook the completion of the Crough Wood Walk and the land purchase. They also undertook development works on that portion of the walk from Crough Wood to the Mahon Falls, some of which is in the Comeragh Special Area of Conservation (SAC). On becoming aware of same this Council instructed the Group to desist from development works. Subsequent to this a referral was made to An Bord Pleanála by a third party seeking to determine if the development required planning permission. This referral was determined in the past couple of weeks in accordance with the Councils original decision on the matter…
“Separately and subsequent to a complaint to the European Commission, following dialogue between the Department of Culture, Heritage and the Gaeltacht, the Parks and Wildlife Service, this Council and the Community Group a restoration plan was prepared and agreement has been entered into to complete same. Waterford City and County Council is currently in dialogue with the community group regarding the execution of same.” With the cost of the original path estimated in and around the €70,000 mark, the Council said the cost of the restoration plan “hasn’t been detailed as of yet”.