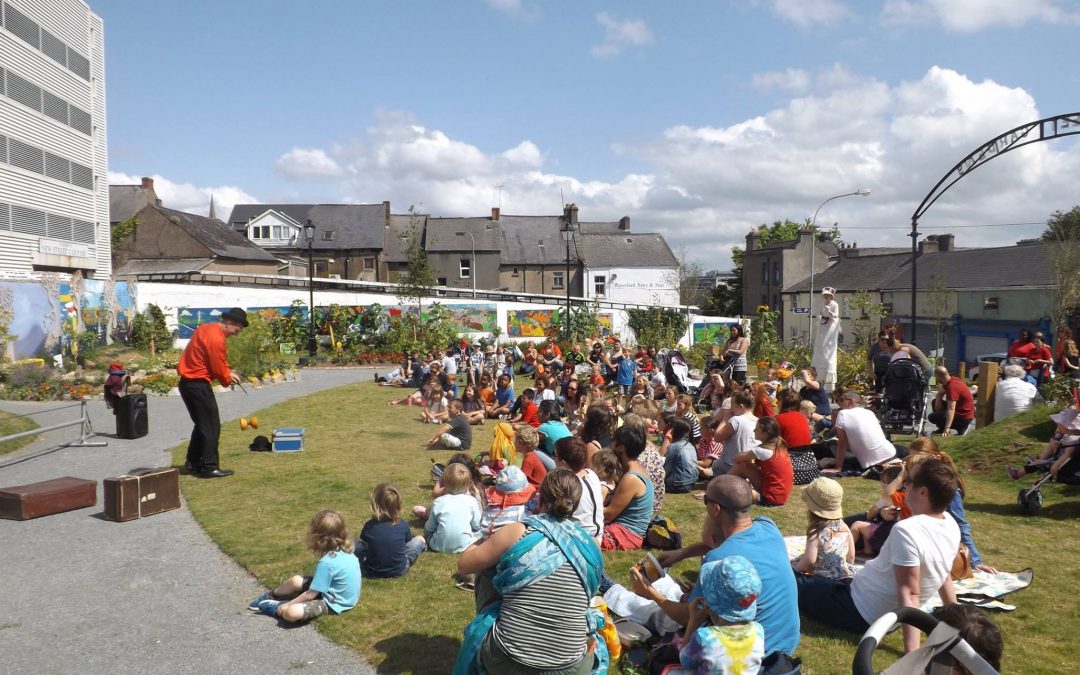 A community garden in Waterford City has been boarded up, bringing an ambitious dream to a sad end.
A large metal wall has been erected around the New Street Gardens site and will remain in place for the foreseeable future. Concerns had been expressed over the transformation of a what was described by a local Councillor as a “once idyllic family friendly park” into an area “littered with drug paraphernalia”.
The New Street Gardens project was officially opened amid much fanfare by President Michael D Higgins in 2014.

The site pictured in its heyday.

The community-led project had received the backing of many local businesses who had donated various products to assist in the garden’s creation. It was envisaged as being a venue for live music, an open-air cinema, a venue for major festivals such as Waterford Spraoi, the Harvest and Imagine festivals, an art space, a learning space and a place for all locals to relax and unwind.
Created to help combat anti-social behaviour at the derelict site, the gardens ironically came to be associated with various types of anti-social behaviour including regular drug consumption.
Recently, Cllr Eddie Mulligan (FF) highlighted an incident at New Street Gardens where he said a young life was almost “snuffed out” due to a heroin overdose.
Cllr Mulligan, who said the incident took place in full view of passing children, said that it was the quick thinking of some young kids who were in the area, and the actions of Waterford Ambulance Service, that gave the victim “another chance at life”.Additionally, the gardens had become overgrown and unkept and dominated by large growths of noxious weed ragwort.
Under the Noxious Weeds Act, it is an offence for the owner/occupier of lands not to prevent the growth and spread of noxious weeds.A spokesperson for Waterford City & County Council has confirmed that the New Street Gardens has now been boarded up for safety and security reasons and this will remain in place for the foreseeable future.
Cllr Mulligan said he welcomed the news.
“It’s unfortunate that the community garden concept couldn’t be maintained or sustained,” he said
He described the garden as a “vital community amenity” but added that the area had become unsafe and said it wouldn’t be sustainable to keep it going as a garden considering that the area is eventually due to be incorporated into the Michael Street development. He acknowledged that it was “difficult to keep people motivated” in such situations.