Brendan Keane reports
A REVIEW of National Cardiac Services is to be undertaken by the Government and while it’s been welcomed by local politicians, concerns are being expressed that the terms of reference are not comprehensive enough.
Sinn Fein TD, David Cullinane, who made a formal submission to Health Minister, Simon Harris following the review announcement, said that its the draft terms of reference are “grossly inadequate”.
In a statement issued last week, Deputy Cullinane said the terms “do not adequately address the needs of the South East region.”
He went on to comment that they allow for a population catchment area to be defined through hospital groups and not geography. “The proposal for an 18-month review process is unacceptable,” he said.
“This is classic foot dragging and a clear attempt to kick the can down the road,” he added.
He has requested a meeting with all of the regional Oireachtas members and said it needs to take place as soon as possible. 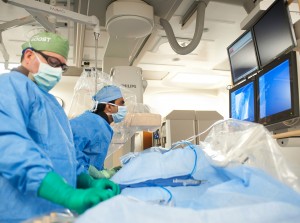 However, Minister of State, John Halligan welcomed what he described as “recognition by Minister [Simon] Harris that elective work merits examination in the National Review”.
It’s expected the review will be undertaken by a team that will be composed of patients’ representatives, nominated professionals from relevant bodies, the HSE and the Department of Health officials.
Minister Halligan said it’s crucial that the remit is broadened to include elective cases in view of the fact that acute heart attacks, primary PCI, account for five per cent of cardiology cases in the South east.
“At present, out-of-hours heart attack patients in the south east are being transported to Cork or Dublin despite the fact that Waterford is a designated cardiac care centre,” he said.
He also said that in-patient and out-patient waiting lists at University Hospital Waterford (UHW) have been historically stagnant as a result of having only one cath lab servicing the entire region.
However, it’s expected that data from the mobile cath lab which arrived in Waterford in September will be included in the national review.
He said early indications pointed to a demand for a permanent second lab at the hospital. “Already the mobile lab is validating that there is a distinct need for two labs to cover elective and emergency work in the south east,” he declared.
“Of those patients who have already received diagnostics in the mobile lab, a number are requiring further treatment,” he added.
In July, Minister Harris agreed to expedite the commencement of the review of all Primary Percutaneous Coronary Intervention (PPCI) services with the aim of ensuring as many patients as possible have 24/7 access to ‘sustainable emergency intervention’ following a heart attack.
The minister also announced that a separate independent review of the services at UHW would take place at a later date.
The European Society of Cardiology (ECS) guidelines recommend that specialist cardiac services should be organised into population-based cardiac networks with hospitals in those networks being designated as General Cardiac Centres or Comprehensive Cardiac Centres.
The ESC guidelines, updated this year, still recommend that optimal treatment of STEMI (ST-Elevation Myocardial Infarction) heart attacks should be based on the implementation of networks between hospitals with various levels of technology linked by ‘a prioritised and efficient ambulance service’.
The HSE’s National Review of Specialist Cardiac Services report, stated the purpose of the review will be to achieve optimal patient outcomes with a particular emphasis on the safety, quality and sustainability of services that patients receive. The report also recommends establishing population-based need at national, hospital group and county level for adult cardiac services.
However, there is also reference to specifying minimum service requirements – including those relating to sub-speciality services – relating to staffing, activity, performance and ‘any measure deemed relevant’.
According to the HSE it’s expected that the review panel will meet monthly and an international peer review panel of experts will also be put in place from the beginning to provide an independent review.
It’s also expected that a report will be submitted to Minister Harris within 18 months of the review taking place.