LOCAL Councillors have expressed their dissatisfaction over progress on the Waterford City Centre Urban Renewal Scheme. A presentation on the scheme was given at the December Metropolitan District meeting of Waterford City & County Council. The Council had previously completed the Part 8 planning process in relation to the much publicised scheme which includes public realm works, changes to traffic layout in the city centre, repaving and resurfacing etc.
The scheme, which is being implemented on a phased basis, was passed by resolution of Council at the 2015 November Plenary Meeting.
However, at last Monday’s Metropolitan District meeting, Councillors expressed their dissatisfaction over the level of progress and the knock-on effects of the scheme. 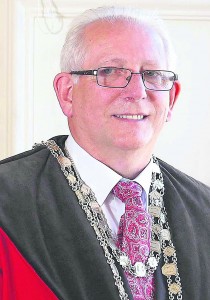 Metropolitan Mayor Cllr Joe Kelly (Ind) said Councillors are being “excluded” while consultants and engineers proceed with plans.He said policies being implemented by Council Executives are “killing” the city centre rather than providing a boost. “We’re written out of the script,” he said.
“When there’s murder on the street and people are giving out, every single Councillor gets it in the neck.” Mayor Kelly outlined various issues in the city centre and said there is often traffic “gridlock” on the city’s streets. “In my view, pedestrianisation has gone too far,” he said. “What is our function if we’re not representing the people on the street? We have to come up with a better way.” The plans, which included the now completed creation of a roof canopy at the Apple Market, also consist of public realm improvements with a combined budget of over €6.6m focusing on High Street, Henrietta Street, John Street, Arundel Square, Peter Street, Colbeck Street, Lady Lane, St Francis Place, Olaf Street and Michael Street.The creation of smaller plazas at St Francis Place, Lady Lane and John Street are also included.
In terms of traffic management, the plans include a spend of €5.945m on works at Railway Square, Bath Street, College Street, Cork Road and Manor St/Parnell St from Railway Square to the Mall.
A new traffic management system in this area was implemented earlier this year.Meanwhile, included in the original plans also is a spend of €3.3m to upgrade works on Hennessy’s Road, Browns Lane, Castle Street, Newgate Street, College Street, Manor Hill, Barrack Street, Blakes Lane, Convent Hill, New Street and John’s Lane.Around €1.4m was allocated to upgrade New Street, Mayor’s Walk, Stephen Street, Bachelors Walk, Patrick Street, John Street and Millers Marsh.Cllr Cha O’Neill (Ind) said the original plans included the provision of a one way system in the Mayor’s Walk/Barrack Street/Ballybricken area. He said residents were in favour of this but it now appeared as though this was not happening exactly as planned.He outlined wider traffic problems in the city and highlighted the difficulties motorists face in accessing the city centre from the Dunmore Road. Cllr O’Neill said Councillors are “not being listened to” and Executives are “not at the races”.Cllr Jim Griffin (SF) said Councillors were being held responsible for policies which were being implemented by the Council and which they did not give full approval to. He expressed concern for elderly residents in the affected areas.
Cllr Eddie Mulligan (FF) said there are many “mix-ups and frustrations” in relation to implementing traffic management plans. He said there are many issues affecting businesses and local residents.Cllr Day Daniels (Ind) was among the Councillors who suggested holding a workshop to discuss the various issues which are arising.
It was agreed that Council Executives would accompany Councillors on a tour of the city which would allow Councillors to highlight various issues.