Eoghan Dalton Reports
A tree felling drive in the city centre has been met with disappointment by some locals.
13 trees outside the Tower Hotel on The Mall and another nine trees on Water Street are some of those that have been cut down in the past month. Others have been cut down on Broad Street and Henrietta Street.
The leftover bases were noticed by John Cloono, a Ballybeg resident and People Before Profit activist. He began taking photos of them last week, documenting what he believes is vandalism.
The outcry comes after protests were held by people in Fethard, County Tipperary against a rigorous tree felling drive there. 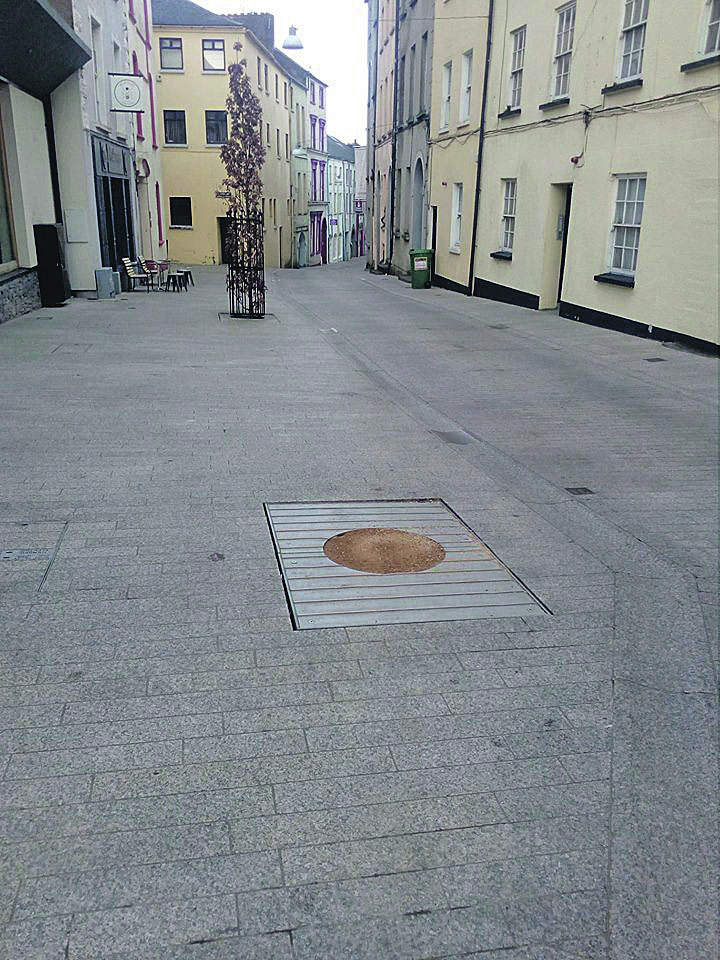 A photo of a felled tree on Henrietta Street, courtesy of John Cloono.

While stray leaves are sometimes mentioned as a reason behind the felling, John feels that idea is as spurious as the theory that the felling is to prepare the city for the installation of a 5G broadband connection.
“We need much more urban trees in Waterford City,” he said. “Urban trees soften the architecture and built environment as well as adding to the atmosphere of streetscapes. They provide shade in summer attract birds and other wildlife as well as absorbing pollutants.“A well chosen creative lightning scheme highlighting trees can add enormously to a city’s night-time atmosphere,” he added.
However, Waterford City and County Council’s Director of Environment Services Fergus Galvin says the trees have been cut down due to a number of factors. “The trees species in both cases were more appropriate to parkland settings and not to the very tight confines of a metre wide verge or a very small root box that restricts the natural root growth of a tree and impacts adversely on a tree’s health and longevity,” he told the Munster Express. In both the Tower Hotel and Water Street cases, said Fergus Galvin, “The tree branches had grown into the facade and windows of the adjoining buildings depriving the occupants of natural light and giving rise to numbers of complaints to the Council.
“We had previously pruned a number of these trees and further pruning would only have severely impacted on the health of the trees as these trees were close to the end of their natural life.”
Mr Galvin added that the trees removed will be replaced by a similar number of a species more appropriate to the urban environment.A tree maintenance programme is carried out across the city every winter. It looks at the age and general health of the trees as well as potential dangers that may exist from diseased or rotten trees. The Council also takes public complaints into account.
Fergus Galvin said that complaints over tree felling are “an on-going issue and crops up regularly where trees that were planted with well-meaning intent 20 or 30 years ago, but insufficient thought was given at the time to the types of trees being planted and their suitability to the location”. John Cloono feels that’s an old excuse: “This line of argument is used every time there is public anger following the removal of urban trees. The Tower Hotel trees were planted the last time there was public anger following the felling of trees on the Mall. One would have expected suitable specimens for the replacement and location would have been used. In truth there are nearly always economic reasons behind tree removal in public spaces,” he continued, such as a shop owner claiming their premises is obscured by trees.
He pointed to the trees on Hanover Street beside the Granary as a positive example of mature trees in a public realm environment, though admitted that Councils with depleted maintenance staff struggle to keep on top of their work, therefore they “often feel obligated to remove trees”. A public meeting on the matter is being considered, where a comprehensive tree policy for the city would be devised and presented to the Council for implementation.