Local Councillors are seeking an input into the traffic plan for this year’s All Together Now (ATN) Festival. Raising the issue at the January Comeragh District meeting of Waterford City & County Council, Cllr Declan Clune (SF) said: “We’re all familiar with the traffic chaos around All Together Now last year.”In advance of this year’s event, he said he had contacted the Gardaí with queries on the traffic plan, but he had been referred back to the local authority. 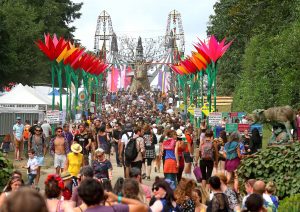 “What changes are going to be made this year?” he asked. “Can we have some input as Councillors into the traffic plan?”Cllr Clune said the traffic problems “took the shine off the festival for a lot of people” and residents in Portlaw, Carrickbeg and Carrick-on-Suir witnessed “chaos”.“We want to ensure everyone has a good time,” he said.“We have a responsibility to make sure it doesn’t happen again. As elected members we should have some input into the plan. We can definitely identify a few of the deficiencies that are fairly obvious. Local knowledge goes a long way.”
Cllr Clune pointed out that traffic management worked well in the first year of the festival compared to last year.
Cllr Seanie Power (FG) agreed and suggested that a workshop involving Councillors could take place. “There are many areas around Curraghmore, such as farmers yards and fields, that could be made available for parking for a few days,” he said. “It’s a great festival. It brought a lot of people into the area. We want it in Curraghmore but we need to have it right so it can continue.”
In response, Council official Liam McGree said Waterford City & County Council has held a number of meetings with the festival organisers in relation to this year’s festival. He said the Council had asked that the organisers engage a firm of consultants to examine traffic planning. “They have done that and prepared a report which was submitted to us for review. We asked that they address a number of outstanding issues and submit a revisited traffic plan,” he explained.
“We are actively engaged in managing the situation for 2020,” he added.
Mr McGree expects the license application for the festival to be received by Waterford City & County Council during the month of February.
“We will then proceed to deal with the application in the normal way,” he said. Cllr Clune asked if Councillors could receive a copy of the revised report. Mr McGree said he could not circulate it to Councillors as it is in draft form but added that he could discuss it at any point and listen to any concerns.