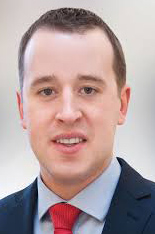 Eoghan Dalton Reports
A colourful disagreement between two City Councillors means on Monday last (March 4th) the rules around the wearing of mayoral chains are set to be examined once again. In a scene that caught the attention of many other Councillors at City Hall last Monday, ahead of the Freedom of the City ceremony for Ireland’s US Ambassador Dan Mulhall and Oxford Professor Louise Richardson, the Metropolitan District Mayor was called out by another Councillor for wearing his official chain to an event set to be presided over by the City & County Mayor.
Traditionally only one member wears a chain for an event. But on this occasion the Chair of the Metropolitan District, Cllr Joe Kelly (Ind) had worn his specific chain, despite the City and County Mayor ranking higher as Chairman of the Plenary Council.
This was picked up on by several other councillors with Cllr John Cummins (FG) confronting Cllr Kelly over his decision to wear the ornamental metal. Cllr Cummins told this newspaper that the thrust of his point to Cllr Kelly was that when it comes to plenary functions, “there’s no role for the Metropolitan Mayor”.
“It was a plenary function – bottom line,” he added. One onlooker stepped in to ensure the exchange was ended quickly according to several of those present, with one describing it as a “classic handbags at dawn situation”.
For his part, Cllr Kelly said he had been in contact with the Council’s corporate affairs section to discuss how the function would play out. He suggested through email that he should sit up at the top table for the ceremony, alongside the Mayor of Waterford. “I was told that wouldn’t be happening.” Despite this, he then decided that he would wear the chain to “represent the city and district of Waterford…It’s never to undermine the plenary Mayor, it’s to represent your district, in a role I’m very proud of and honoured to hold.”
Other Councillors who are permitted to wear chains when officiating events are Cllr Ray Murphy (FF) as Chairman of the Comeragh District, Cllr John Pratt (Lab) as Dungarvan-Lismore Chair, Cllr John O’Leary (FF) as Deputy Mayor of Waterford and Cllr Blaise Hannigan (Ind) as Cllr Kelly’s deputy. “My view is all of the chains should have been worn, because it would have added to the pomp of the ceremony,” he continued, though he noted he had not raised that possibility with the Council ahead of the Freedom of the City ceremony.

When asked if he took issue with being questioned by Cllr Cummins on the matter, he said: “If any Councillor had a concern they should have brought it to corporate affairs, but certainly not raise it on the night.” Cllr Cummins, meanwhile, feels that having been told in advance that the Freedom of the City function was a plenary function, the Metropolitan Mayor should have dressed the same as the other councillors. A dispute over who gets to wear the chain to official events has been going on for some time in the Council, with Cllr Davy Daniels (Ind) telling members at Cllr Kelly’s election last summer that he was “disappointed” with what he felt was the downgrading of the role of City Mayor and the plenary Mayor coming ahead of the city representatives at functions.
Cllr Kelly said he took issue that the proposers and seconders for the conferring ceremony were from Fianna Fáil and Fine Gael, who dominate the Council pact: “The narrow party politics needs to be taken out of these things,” he stated.
The position of Mayor of Waterford has been shared by the two larger parties since the amalgamation of the City and County Councils five years ago. Cllr Cummins said that “undoubtedly there is confusion among the public about the roles” and that the procedures around who wears what would need to be put under the microscope again. He added:
“Look, we’re either a combined council or we’re not. What’s the advert? ‘One City, One County, One Council’? There can’t be two separate organisations.” He said he had received an apology from Cllr Kelly following their exchange, which he accepted and felt put an end to the matter involving them.
As for the matter of who wears the chain in the Council and when, he feels that if the public vote in favour of having a Directly Elected Mayor for Waterford, then that “might resolve the issue”. “I’m only ever trying to enhance the position,” said Cllr Kelly. “We need to learn from these things and not fall back to old fault lines and become more entrenched and get away from the one-upmanship.”