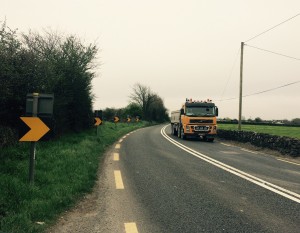 'The Bends' in Mooncoin, which Transport Infrastructure Ireland believes ought to remain an 80kph zone. Good luck finding anybody living locally who'd agree with that.

TII ‘must see how bad this stretch of road is themselves’
A notorious stretch of the N24 just outside Mooncoin, optimistically earmarked for realignment in the next two to three years, has to be seen by Transport Infrastructure Ireland (TII) to be believed.
That was the view expressed by all six of South Kilkenny’s County Councillors at a special meeting held in Ferrybank on Wednesday last, where they called on the TII (previously known as the National Roads Authority) to experience “the difficulties residents have lived with for decades”.
Piltown District Chairman Pat Dunphy (FG) couldn’t conceal his exasperation after the meeting was told that TII has recommended that the existing speed 80kph speed limit on ‘The Bends’ should be retained.
This was despite the fact that Kilkenny County Council, in addition to the six local Councillors, also called for a reduction to 60 kph given decades of serious road traffic collisions on the road, which have included several fatalities.
Area Engineer Ian Gardner told Councillors that a “huge representation” on the matter had been made by the Council to the RPS Group, charged by TII to undertake road engineering works throughout the motorway and national roads network. But that hadn’t had the desired effect with the TII, much to the disappointment of Pat Dunphy and his fellow Councillors.
“I know that €3.5 million has been set aside to realign this dangerous stretch of road within the next few years,” said Cllr Dunphy.
“But to see local knowledge effectively tossed to one side, along with a recommendation by our own engineers, about lowering the speed limit on the existing road, is as disappointing as it is bewildering.”
He added: “We know, as Councillors, that setting speed limits on national roads is out of our hands – it’s also out of the Council’s hands – this is a function reserved for the TII.
“But given what we know about this section of road, where there is only 20 metres of visibility for residents pulling out of smaller roads just off the Carrick Road, where there have been countless accidents over the years, and countless more near misses, to be pulling out onto a road where you often have to rely on what you can hear rather than what you can see – and be told by the TII to leave things as they are? Are they serious?”
Locals told The Munster Express last week, that there had been “hundreds of serious and minor accidents” on the road, stretching back several decades.
According to local resident and well-known local photographer Joe Cashin: “Between Holden’s just passed our house and Sean Mackey’s (truck yard), there have been at least five people killed down through the years – maybe even six.”
Pat Dunphy told last Wednesday’s meeting: “I would like the TII to send someone down and see what they think if they’re behind the wheel of a car trying to pull out onto the N24 with only 20 metres of vision to work with.
“At least if the speed limit was reduced to 60kph, which we are in agreement, with, anyone accessing the road would, in all likelihood, be doing so in a safer situation than they are at the moment.
“This decision flies in the face of the traffic calming measures we have put in place on both the approach to Mooncoin and through the village itself, and whether the realignment was coming down the line or not, the speed limit simply must be reduced here, and it’s something I feel as a Council we have to dig our heels in on.”
Cllr Tomás Breathnach (Lab) said that, in his experience, 60kph was the “adequate speed” for this section of road, “and that point needs to be made to the TII”. He added: “And this really is something we all need to be united on.”
Cllr Eamon Aylward (FF) joined the chorus on this matter, stating: “We’re all in agreement on this – Councillors and engineers alike. It’s a very dangerous road and this matter really does require someone from the TII to come down here and see what locals and people using the road every day see all too often: accidents and near accidents.”
Cllr Melissa O’Neill (SF) said the road in question was “clearly an emergency case,” adding: “reducing the speed limit here is an absolute must”.
Cllrs Ger Frisby (FF) and Fidelis Doherty (FG) were equally supportive, with Cllr Frisby adding this was a further example of “the complete disconnect between national decision makers and the knowledge of locals, their representatives and engineers”.
Cllr Dunphy called on a TII representative to “come down here and do the manoeuvres that residents living off the Carrick Road have had to do, without adequate safety provision, for years. They’re not getting away with this.”
A letter will be signed by all six Councillors at tomorrow’s (Wednesday) monthly Municipal District meeting in Ferrybank, in which an invitation to the visit the area – and drive onto the road from the local exit/entrance points – will be extended to the TII.